Did you know that they’ve removed all the fucking parking anywhere close to the Threadgill’s restaurant? We sure as fuck do now. Luckily Wayne Kramer went on later than promised, so even after 20 minutes of circling and finally finding a meter, we came in in the middle of a blisteringly loud set by the Good and the Bad.

Soon enough, Wayne got up on stage and started into a rendition of “Kick Out the Jams” that had more in common with a Stooges set than with the reformed “MC5” show I saw a handful of years ago at the Echo. It was blisteringly loud, too, and he went off on several sideways melodic tangents anchored by the sheer volume of the so-hard-it’s-like-metal garage band Good and the Bad behind him. Sadly it was his only song. 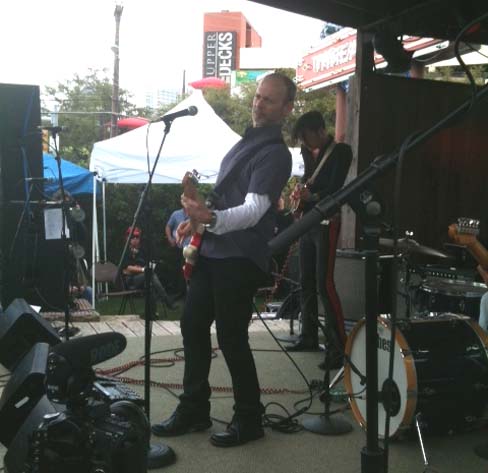 Up next was Shearwater… “I never thought we’d be following Wayne Kramer,” one guy in the band told the crowd. “Maybe that’s not a good thing,” another guy in the band replied. And he was so right. In comparison to Wayne Kramer and the Good and the Bad, Shearwater sounded wilted, flavorless, “watered” down. Someday, people will look back on this decade, and I’m pretty sure my photograph of this guy with his glasses and young Steve Jobs beard standing in front of his little electro box will be the symbol of all that was both right and wrong about our era: 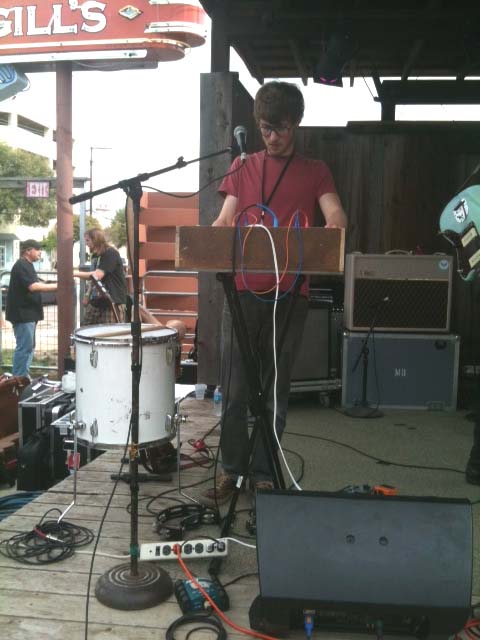 The Bombettes were up next—Swedish gals with a good sense of humor. They even posed for me when they saw me whip out my camera… 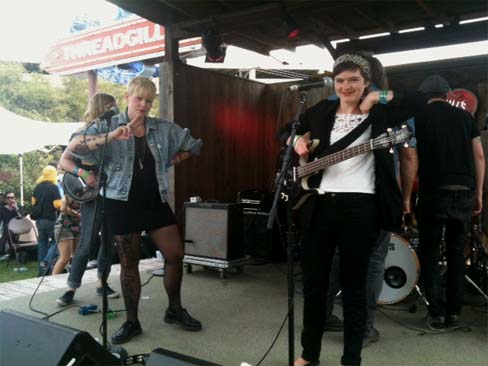 Though they were a little cleaner sounding, they reminded me of the Demolition Doll Rods or the young Donnas on their first song, which spelled out the band’s name: “B, O, M, B, E, double-T, S!” They even picked on the other bands a bit. “This song is about old men with guitars! There are a lot of them here…”  The singer has a young Belinda Carlyle thing going on, with a touch of Roxette about her, and the band does what seem like three-five part vocals, in unison, like the Monks; “harmonies” would be less punk.

The next band was Sauti Sol, a Kenyan six piece with amazing flashy instruments, tons of great dance moves, a tall singer (who looks quite a bit like out-of-drag RuPaul) and a short guy who looks a bit like Kanye (or maybe DJ Jazzy Jeff, my uncle says) with his grid sunglasses. Each of their songs had three of four whole parts, with time-changes and dynamics, lighting-fast bluesy Prince guitar licks and lyrics in multiple languages, mostly about the wedding customs of Kenya, specifically Nairobi.  “There’s thieves, there’s whores and pimps, but it’s a beautiful city!” 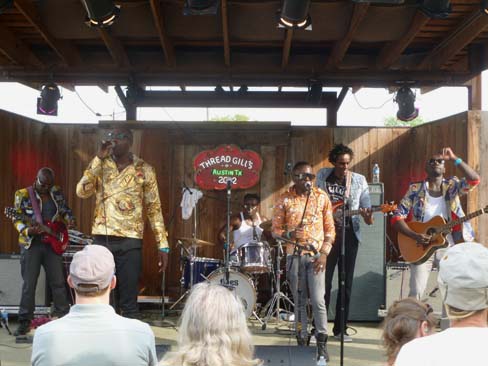 It’s hard to pin down why this band would be in Roky’s Ice Cream Social, but they didn’t just have the most diverse sound, they had the most diversity of sounds. Sometime’s they’d have a bit of a reggae beat, but with some angry “bam bam bam” guitar fuzz! One song segued into a mellow song that almost became self-parody, with some whoa-whoa-whoa-whoa-whoa stuff like David Cross did in 3×1-1! But then right when it was about to get sentimental, a sax groove came out from the little guy, an insistent beat like your tongue would do on a woman you really loved: “Bum BUUM bum bum-be-dum, Bum BUUUM bum bum-be-dum!” Then they laid down a tight 4/4 beat over it and said something with the band name in it. They finished with a little synchronized dancing, and with the tall guy ended by waving a white hanky in a loop around his face, like he was forcing us to admit that WE have now just utterly surrendered to him!

After a set of Peelander-Z doing the exact same Yo Gabba Gabba-esque set they did last year, which was admittedly charming (they even pulled the Kenyan bassist on stage with them), Roky’s son led his band  in a song to prep us for Roky. “I’m going to play one song with my band, and then we’re going to bring up Roky—can you handle that? One song?” I felt a little bad for him, and a little upset. If you have to beg an audience to allow you play one song, an audience that did not come to see you, maybe you should just forget it? Then again, there’s a back story here that’s incredibly sad, and he has my sympathies—can you imagine how terrible, and absent, a father Roky must have been? 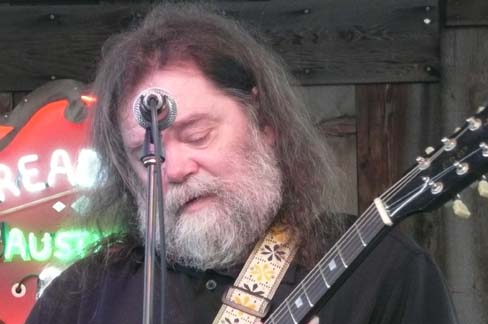 Roky Erickson was even rather absent when he got on stage. His voice is still killer—a gravelly country bluesman’s shriek, which worked great on his Bo Diddley introduction song—but he’s forgetting whole sections of his own songs. There are parts of them he remembers, like the spoken-word soliloquy from “Creature with the Atom Brain.” But he struggled on otherwise beautiful songs, like the 13th Floor Elevator’s “Splash 1,” lagging then rushing to fill in half-remembered words on the verses. And for the life of him, Roky cannot remember that “on St. Swiven’s Day he was born” line from “Night of the Vampire,” my favorite! Fuck a duck! 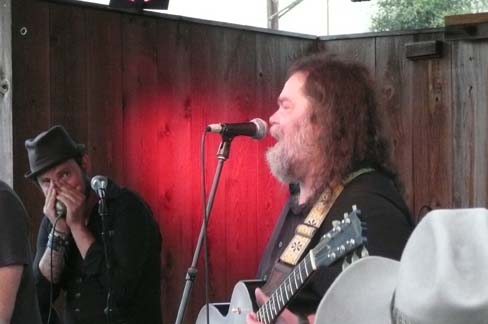 I saw glimmers of hope in the rapport Roky had with his son, and I will probably always go see him for that voice, and for the chance that his mental faculties will one day return to the level they were a few years ago, when he confidently raised the roof at the El Rey (last month’s show was about the same as this one, i.e. not good). But watching him is sad. He’s a sad, confused old man, and he doesn’t seem to want to be up there for our amusement. Am I supporting a singer I love, or am I a freak show patron torturing an old man at the end of his life? Even the scene later, of people following Roky around and around the same car as he gently tried to escape his own scheduled meet-and-greet with the fans, was a sad perversion of A Hard Day’s Night.

I drowned my sorrows in a couple of Threadgill’s boiling-hot fried pickles, then headed for the culmination of all things Austin and L.A. RECORD, our showcase at Emo’s East, the exact same place I was the night before. Only, the previous night had been devoted to high-profile indie band of Montreal, and this night was all about the punkiest of garage bands, a totally different challenge for the sound guys to master.

And I don’t know that they totally got it right. It’s my third time to see Thee Oh Sees in about a week, and though I loved them again, the room seemed not quite suited for them. It was a little boxy. It was still good stuff, but compared to the other night at the Scoot Inn, where I didn’t even mind my head getting bashed in if I could just hear one more song.

Kid Kongo Powers’ band was up next, and damn, that guy looks like L.A. scenester Blaque Chris, who was also present, though somehow slipped through my fingers (ew) every time I wanted to take a picture of both of them together. Kongo’s band members were dressed in vaguely biker-esque denim jackets and singing some kick-ass songs, including a cover of Thee Midnighters’ “Jolly Green Giant,” a total mindfuck that made me go a little nuts.

Cheap Time came and went, and then the Spits took the stage, dressed in Jack-Chick-approved black demon capes and wearing Reagan masks.  I’ve actually never seen the Spits live, though my whole friend group thinks they’re the best thing that ever happened to punk, and I can see why from their stage show—definitely more punk than garage, they looked to the street-thug side of punk from the 70s, the Dead Boys and Electric Eels and… fuck, is that Blaque Chris, and L.A. RECORD editor Chris Ziegler, and a host of other ne’er-do-wells, all dancing up on the stage? I have the same back-stage passes as they do! And so it was that I jumped up on the stage and danced like a spazz with all my friends.

Being onstage was pretty awesome, and I got to do it all over again for the Gories… holy fuck! This is what garage music is all about, with no bullshit cymbals to get in the way of more rock! And it sounded as good from the back of the stage as it did from out front, where the crowd was writhing and rocking at maximum velocity, with an occasional member of the extended L.A. RECORD crew flinging him/herself full throttle into the audience from above. We were hardly less rowdy on the stage, and while I kept trying to recite Philip Seymour Hoffman’s “Friendship is the booze they feed you” line from Almost Famous, I couldn’t help feeling transcendent, even grateful. Rock and roll is my god, and right now I’m at the feet of the guru. I’m on the freedom bus, to good time city, and I haven’t even paid my fare! 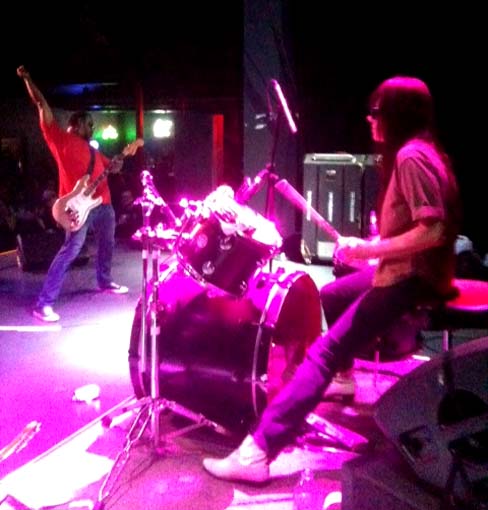 Mick Collins told me only a couple years ago that this band would never reform, but they seemed to have worked through all past grievances. Co-lead Dan Kroha kept looking back at drummer Peggy O’Neill with a clear expression of joyous “I’m rockin’! You rockin’?!? Let’s rock!” They finished the set with a rousing rendition of Link Wray’s version of Willie Dixon’s “Hidden Charms,” possibly the best rock song ever recorded, then did two encores, the second one a cover of “Mona,” which Kroka and Collins only agreed to because O’Neill just kept drumming until they picked up a guitar and finally did it—all at about 2:05 a.m.

It was a magic night, during and afterwards, when we drank and caroused and set off multiple fireworks in the parking lot and shouted and tried to pick up on each other and lost cell phones and set off for parties and ended up at other parties and talked to bassists for hours. But those are tales for my grandkids’ hip friends, not for you.