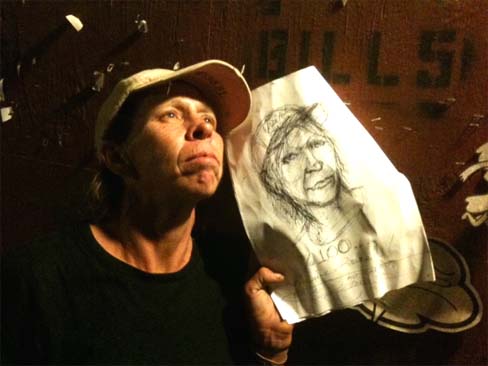 “We just signed the lease Thursday,” the adorable twenty-something proprietor of Wardenclyff told me while we waited for another noise band to start. “Wardenclyff” was once a tiny house that had been abused and then abandoned by its previous owners—the inside had stained dry scratchy hardwood floors and a useless sink in the middle of the room. Now, poof!, it’s suddenly an art gallery, with graffiti lining the walls inside and out, and a homemade quilt over the windows to keep out the sun. Despite the primitive accommodations, they had a grassy parking lot and a backyard and a couple rough stages—the perfect recipe for what is the true heart of SXSW, the impromptu showcase.

And nothing could seem more impromptu than a tribute band to Los Angeles’ favorite cult, the Source Family. A documentary about the Source Family had played before noon, and to celebrate, some local Austin musicians formed an impromptu “Source Family” band to play songs by the Source and its associated band, Ya Ho Wha 13. There was a viola player and a bunch of keyboardists and percussionists. But the Casio player seemed to have the most fun. 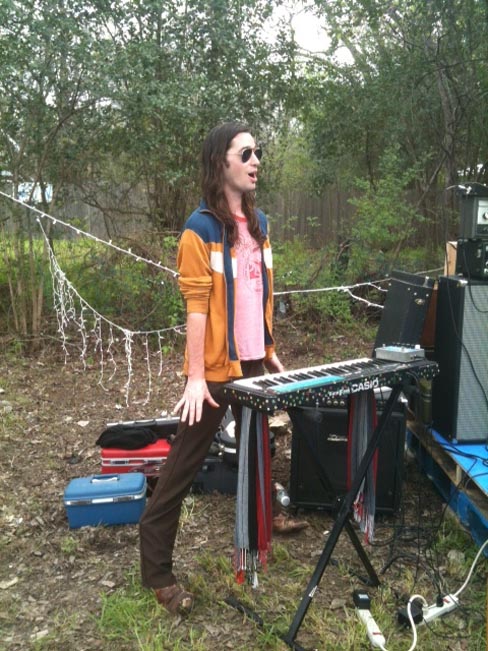 And some of the Ya Ho Wa cult members showed up, one even dressed in his white tunic and medallion! You’d think that being in a cult, they’d disapprove of young non-believers performing their songs as a lark. But the Source survivors seemed to love their tribute band’s sweeping vocal harmonies and Can-like, in-the-pocket bass grooves centered around the drumming from Lisa Cameron from ST 37. There’s nothing quite like the juxtaposition of a hippie in his transcendental tunic trying to capture something on a digital camera. 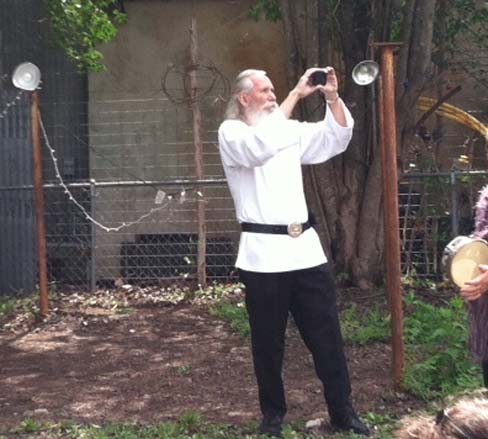 Then followed plenty of bands, mostly one-person noise acts such as Sky Chance. He was a delightfully pushy, prematurely graying young man who beat-boxed through a digital delay pedal and had the demeanor of Wayne Coyne from Flaming Lips, if Wayne had spent some time hunting alligators on Swamp People. The very second the Source Family tribute band ended, he brought the crowd from outside to inside the venue like the Pied Piper, screaming into a mike routed through effects pedals strapped to himself and some kind of radio—perhaps the same transistor radio he later used inside the house as a source for found recordings, which he manipulated and warped (in ever sense of the word) for his own purposes. And I really mean for his own purposes, since he never once looked at us or faced the audience.

We also saw Ferdinand Rising and Sprills of Ore and a couple other interesting minimal noise acts. But Daze of Heaven impressed me the most, if for nothing else because this guy approached loop-driven music from the exact opposite perspective of most one-man bands that might play Pehrspace or the Smell. Instead of creating beats with his mouth or a machine and then using that as a platform to make noise atop the beats, Daze of Heaven sets up his soundscape first, blasting his clarinet into the mike, then putting sounds from his mouth and from found feedback (I’m talking serious crackle, the kind of hiss that sounds like rain hitting drywall) into the mix. 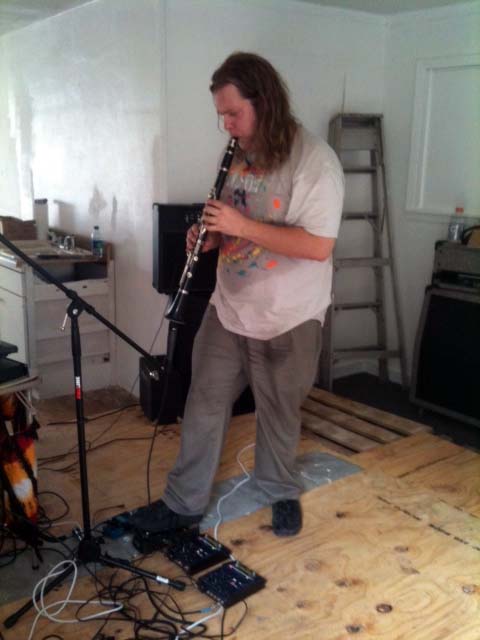 When he’s all done setting up the sound, this dude jumps into his drum set, which he plays standing up, in attack mode, almost at random and yet synced somehow with the swirling noise mess he’s cocooned around himself. 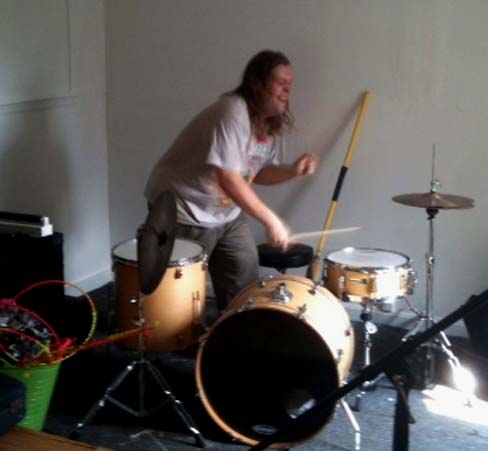 And we were ready to leave, but we couldn’t go without watching How I Quit Crack all the way through. This two-piece consists of a relatively normal dude on guitar accompanying a neon goddess covered in bright day-glo colors and face paint. She even wore a spindly set of plastic toys projecting into a pointy cone in front of her, like something the doozers at Fraggle Rock would make. The band had put black lights all around her, so that her face and clothes (and did I mention there were paper flowers all around her?) gave off an odd psychedelic glow, somewhere between the cheapest horror ride at the state fair and the most futuristic movie Roger Corman never got to direct. 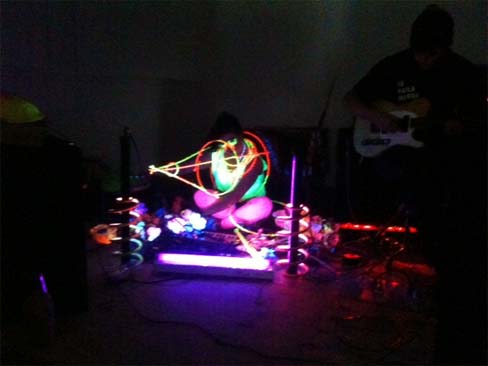 But we are at South by motherfucking SouthWEST! And after burning myself with some fireworks in the parking lot, we headed for the Spider House, and caught a band who we’d never heard of before, but who were not shy at all about letting the sound guy know their name.

“I don’t know if you know, but our band is called Deep Space, and so the reverb has to send us to deep space!” 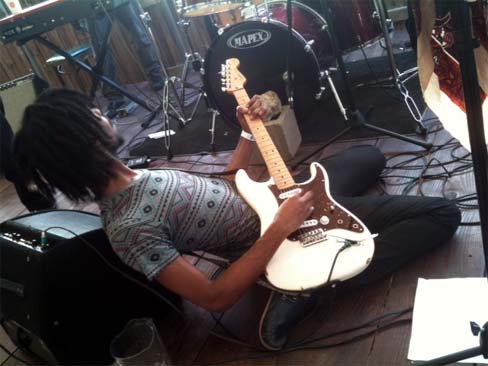 The guys played a really fun version of space rock, refreshing in its simple set up: no giant cacophony of echo, just a Vox Jaguar and a Rickenbacker or two. There wasn’t even a bass! This was the straight-up rock from outer space, akin to Hawkwind or Spacemen 3, easily digestible over a beer. Me and some other guy pulled out our cameras, and the singer started hamming it up a bit, lying with his head upside down at the base of the stage and going on about how “People don’t know how to love!”

So we scooted on over to the Scoot Inn, where people don’t care if you don’t know how to love—they’d much prefer to put a Sailor Jerry’s drink in your hand or let you play ski ball for a buck. Fun times!

All the times on the schedule were utterly different than what we’d been told in the preceding weeks, so it was sheer fate that allowed us to see K-Holes, a sax-wielding band with a singer whose hair was so blond, it was almost white—kind of a Sylvia Miles thing going on. And she’d sometimes sing in a sinister “huff huff” style, like Miriam Makeba in When We Were Kings, but, you know, whiter. The rest of the band was just as hard to pin down stylistically—to describe them as being like the Stooges’ “Fun House” wouldn’t be far off, but they also sometimes approached the dark side of surf and instrumental rock, e.g. Mexican bands like Los Locos Del Ritmo. Many of their songs began and ended quite a bit like “Get Off the Road,” the theme from She Devils on Wheels, so I suppose you could call them “retro” but in the way that every band everywhere is retro in the wake of the death of rock and roll. 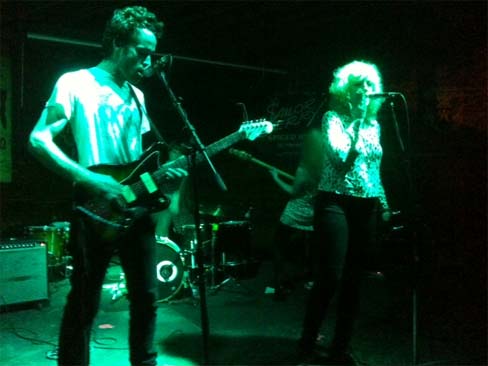 It was in that spirit that we then went to Elysium to catch the Stones Throw Showcase, thinking Peanut Butter Wolf and the gang would provide us with some solid sample-based hip hop and electronic music—which is why Vex Ruffin freaked us the fuck out with their rock and roll! In hindsight, I should have expected their inclusion. Vex has been all over the place (including, at some point, my backyard), and in fact just released a free EP a couple days ago on Stones Throw. But it was oddly delicious to walk into a hip hop show and see people playing bass, drums, and guitar and making solid garage rock, albeit with one dude twiddling a delay pedal in his hands.

JonWayne got on the stage for a bit to throw down his rapier-wit witticisms, but it was MED who really kept the crowd in a frenzy. Not always my style (I’m a weirdo, and MED could easily be a massively successful artist who appeals to millions), this time MED’s raps were spread across some Serrato-scratched breaks from Peanut Butter Wolf, whose wacky sense of timing meant the beats were dropped in and out, with the bass side of the mix coming and going in a funky but quirky manner. It must have been hard for MED to rap over, yet he came in on time every beat, and encouraged the room full of flushed faces to talk to him about how often they smoke weed as he encouraged them to smoke it often. 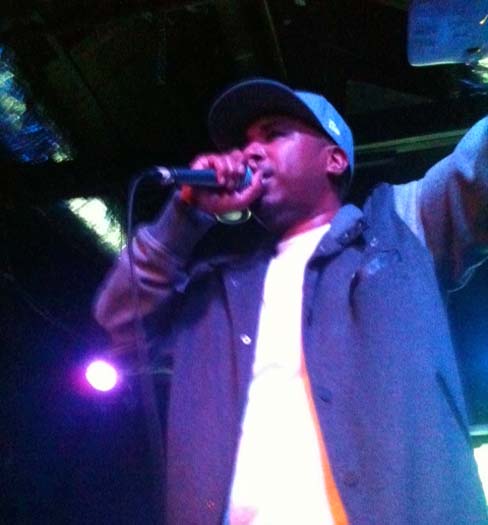 Satiated and in a state of beat-ific bliss, we moseyed back to the Scoot Inn and caught a set by Thee Oh Sees. Perhaps no garage band out right now inspires such enthusiasm from crowds, who slam-danced to their catchy garage riffs in a manner as brutal as at the Cathedral/Nails show I saw last week.

To secure my spot near the front meant getting pummeled for the entire set by the elbows and armpits of sweaty young men. In the melee, I wound up losing a cool Burger Records button and nearly losing my hat! I saved it from the ground before it got stomped on too many times, but couldn’t save myself when some guy’s skull came crashing down at me from 10 feet away, busting my lip and causing me to play the world’s tiniest violin for myself as I threw a much-needed personal pity party.

The band itself was far better than they had been last year (not that they sucked then), and Petey Dammit’s plucking of the old Japanese Fender Jazzmaster guitar, down-tuned to the bass register, really kept the songs a poppin’ with the “ba ba doo, ba ba doo” beats. We were already salivating to the point of pure drool when they full-on blew our minds, closing out the set by having Nick Murray of White Fence sit in on drums. 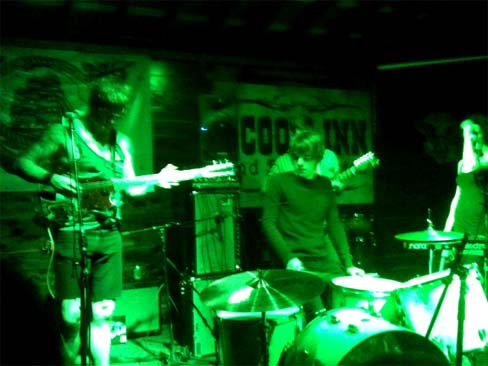 Soaring on waves of euphoria, we somehow managed to make it home and to bed for a couple hours, before morning and more shows beckoned.

FRANKIE AND THE WITCH FINGERS: ZAM (PLUS ALBUM PREMIERE!)