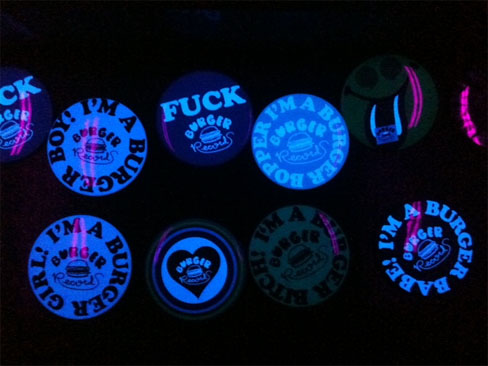 Compared to Tucson, El Paso was a ghost town. Even the restaurants were all closed! We cruised down Mesa hunting for Mexican food, which is how we stumbled across the West by Southwest festival at the Lowbrow Palace.

A quick and expensive meal next door meant that we missed Marriages, the super group starring Emma from the Nocturnes and some cats from Red Sparowes. But we did catch a set from Whirr, a very shoegaze-y band from San Francisco with three guitars—perhaps one too many, as the sheen of sound didn’t really seem to have enough bite, leaving all the songs a bit same-y, with no real dynamics or tempo changes or flourishes to help the songs truly hit the “OMMMMMM” wall.

Then again, these guys are on Tee Pee Records, a pedigree I don’t scoff at, so maybe a lousy P.A. was to blame. The vocals were buried in the mix, and co-singer Alexandra Morte had an expression of sorrow on her face that may have been part of the band’s shtick, but may have been genuine annoyance at the fact that no one could hear her. I shouldn’t say they have no flourishes, as her synth setting was pretty mesmerizing when it poked out from the delay of her compatriots. There was a certain futuristic hiss to it, like a spaceship landing with the help of hydraulic brakes.

But we stayed till the end because we wanted to see Deafheaven, the most interesting post-rock metal band I’ve possibly ever seen. Guitarist Nick Bassett of Whirr also plays in Deafheaven, but here his sheen of shoegaze worked far better, buttressed by a crew of harder edged players including the amazing double-kick drumming of Trevor Deschryver. Deschryver’s insistent melee of beats gave the songs a feeling of urgency right out of the gate, as though they’d taken the crescendo at the end of a song by some lame Coldplay-type band and started there, building whole songs around something that felt explosive, hypnotic, and yet grimly final, like watching a tragedy played out over and over again on CNN as you stare, helpless.

And commanding us in our helpless terrors was singer George Clarke, whose shrieking screamo vocals were only slightly more extreme than his slicked back hair and combat boots. He’d scowl and roll his eyes back into his head, and held the microphone between his palms, keeping his fingers pointed up, like the outline of a chalice, beneath his head. 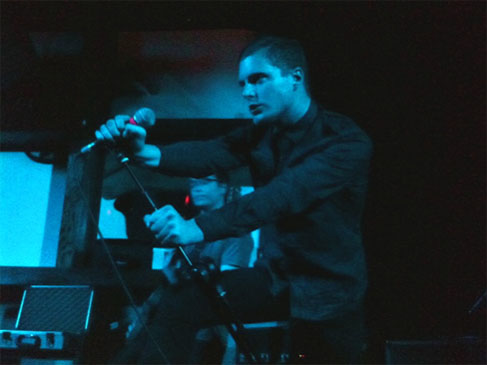 The spell was only broken after the last oscillating torrent of feedback at the end of “Exit Denied” had died down, at which time we jetted back to Lips and to the Burger Showcase.  Normally a lesbian bar, Lips feels kind of like Home Room back in L.A., albeit with alcohol, and so the P.A. isn’t exactly the most professional. When we showed up, Sam Flax were still getting their mic balance together, with local honcho Leo Lara fiddling with a bunch of knobs to make the magic happen.

Sam Flax had a lot more aggression than they’d had in Tucson, maybe because the sound at Lips was hotter. Coming as we did from the palate-obliteration of Deafheaven, it’s saying something that we could be moved by the danger and darkness in these songs. I regretted that they had to cut their set short.

Actually, all the bands had to play short sets—they must have been running behind, maybe due to sound issues, as Feeding People played only two songs, and Cosmonauts played what seemed to be only one, “Super Reverb,” a smashing rocker that caused much beer bottle clinking and good cheer from the audience.

King Tuff continued that vibe with his power trio—tonight Magic Jake on bass was wearing a bootie-shorts version of Evel Knievel’s uniform, while King Tuff himself was bundled in a concoction made out of a sports jersey and spandex pants with an American flag motif up the side. And of course, the King, the man of a thousand voices, decided to change it up a bit from the day before, going more raw and ecstatic. His voice and rockin’ guitars roused the crowd to the point where some young men actually hurled me from the floor and twirled me overhead! I was so dizzy, I immediately sauntered over to the Burger merch counter and bought up a gaggle of tapes and 7 inches.

The show, bursting at its creative seams with talent and rock, went just a tad past 2 a.m., so after the final note, there was a mad rush by management to get us out of Lips and onto the streets. There we got to check out the full breadth and depth of Magic Jake’s outfit, and snapped some fun tour photos of Feeding People’s drummer Mike Reinhart’s bloody pinky. VIDEO PREMIERE: THE FLYTRAPS “FEMALE OF THE SPECIES”