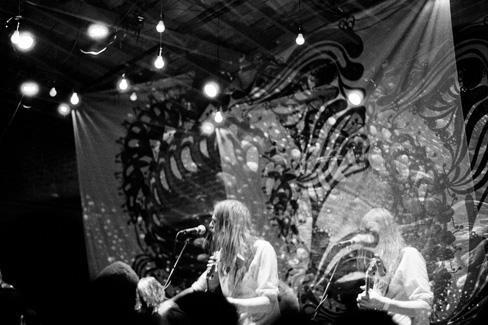 L.A. people love Graveyard. Even though I got to the Bootleg Theater before 9 p.m., I had to wait forever to get in. It was only by the skin of my teeth that I got through the ginormous line backed for blocks up Beverly Boulevard and got a classy microbrew in my hand in time to see the Shrine.

Actually, you don’t “see” the Shrine so much as you feel them. Their first song, “Zipper Tripper,” was so loud that it bypassed my ears entirely, plowing right through my skin and causing my bones to reverberate at the same frequency as guitarist Josh Landau’s wah pedal. Odd to say, it felt a lot like the sound bath at the Integratron, though channeling a dirtier, brattier kind of chi, an otherworldly yet of-this-worldly feeling that a Christian might have described as “being possessed.”

If you haven’t seen the Shrine, you should check them out now before they explode. With their minimal gear and vintage enthusiasm, they have the ability to start a set with high-energy chord-and-lead-lick driven songs, then push the throttle out even further by dipping into frantic numbers like “Freak Fighter,” which sound a bit like what thrash metal would be if it had evolved straight from Thin Lizzy and bypassed Judas Priest entirely.

Saturday, the delightfully clear sound of the Bootleg (this was the actual theater, mind you, not the little platform by the front bar that you’re probably used to) allowed the Shrine’s freakiness to fight on with a little less resistance. Eventually the sound guy shrunk the volume down a little, from Hell to mere Valhalla, or maybe Landau turned his amp down to 10, because for the first time in a live setting I could really hear bassist Courtland Murphy. He seemed to be enjoying the clarity as he smiled through his bushy beard and really boogied on “Primitive Blast,” one of my favorites.

Radio Moscow was up next, another 3-piece, this time from Iowa. Compared to the Shrine, it was a bit samey: most of the songs were built around drummer Lonnie Branton’s “one, two, fall-down-the-stairs” drum riff with descending bass lines by Billy Ellsworth–think Mudhoney’s “Touch Me I’m Sick,” but with metal guitars and gentle vocals. Clearly these cats love great music, and theoretically I could have found this psychedelic strain of hard rock completely awesome, but I couldn’t really distinguish one song from the next. Perhaps I’m just not familiar enough with their songs, or maybe it was just rough following the Shrine, but they lacked a little structure.

Yet just as I was about to give up and go take a bathroom break, Radio Moscow jumped into a slow, almost bluesy number called “250 Miles.” This song alone was worth the price of admission—first guitarist Parker Griggs picked some down-home notes that veered creepily close to 80’s Clapton but without the cheese, and then they kind of simmered down, only to explode into a cacophony of psychedelic METAL that ebbed and flowed like the corpuscles in the nerve cells that send signals to the human brain from the pineal gland.

I kind of wished I had taken that bathroom break, though, after seeing what awaited me next. The Bootleg Theater was criminally unprepared for this kind of crowd and hadn’t invested in any port-o-johns! There was just one little cubbyhole near the photo booth where a man could drain his lizard. The bathroom line was nearly as long as the ticket line had been, and, in a rare feat of gender norm reversal, the guys’ line was actually way longer than the line for the ladies’ room. Though maybe the crowd was actually playing out another sexist stereotype, that of the metal show as a place where dudes congregate to drink beers and get riled, and where women are a much-appreciated but sparse garnish to all the sausage. Or maybe metal chix (that’s how you spell it) just know how to pee faster than us guys. I have no answers here. But it was weird seeing the ladies zip right into the bathroom while I stood there feeling my kidneys rupture.

After some lengthy brodown conversations and, finally, an orgasmic pee into the men’s room sink, it was time to press my way through the long-haired throngs and hear the Swedish hard rock of Graveyard, a band with ties to both Witchcraft and Witch who just keep getting bigger. Last time they played the Bootleg a few years back, they could fit their fans in the front room, yet tonight the crowd was so huge, they’d had to arrange a stage in the big room BEHIND the normal theater stage, abutting the old factory’s brick wall in back.

As you’d expect from a band with such as somber name, Graveyard was a bit quieter and moodier than their predecessors. And while singer Joakim Nilsson does sing a little bit like Magnus Pelander of Witchcraft, Graveyard’s sound has grown away from anything remotely doomy, last year’s album clearly bringing them to a groovier place where they can play wearing Western shirts and illuminated by a psychedelic oil-pan light show. Perhaps  Doug Mosurock of Dusted was a bit right in 2008 when he said that Graveyard was trying to recreate a sound with their first album, but Saturday’s show proved them to have moved on to a new sound, one (like Dead Meadow’s) that I’d be hard-pressed to pin to any specific bands from the 70s; sure, you could vaguely say “arena hard rock,” but that’s more of an epithet than a useful description. You might as well say they sound like “old rock and roll.”

And they do have influences, to be sure—the gallop of one song sounded like a harmonica-less Yardbirds rave-up, and their first encore had a certain Zeppelinity to its folksy parts. But for the most part, that part of my brain that I love so much that compares bands to other bands just switched off. They’d charmed me. I was mesmerized. Goddam it, they’d pull into a power ballad with no irony, slam us down into a drum roll, then end with a chord change like an exclamation point! This was good, hard music, and only a dick would ruin things by playing “spot the influence” rather than banging his head, as a whole roomful of people were doing in unison. When Graveyard did veer into old material, like “Satan’s Finest,” the house came fucking down, with enthusiastic young men almost forming a pit, or at least a sort of mosh-ripple like one might have experienced at a late 80’s Fishbone show. By L.A. standards, that kind of crowd reaction counts as a riot.

Graveyard ended with what seemed like three enthusiastically-received encores, filling our ears with ballads and crunchers and lyrics so wizard-like, they called a dreadlock denizens up from the crowd like a siren-call to get goofy on a dead microphone before a long-haired roadie in a fringe leather vest kicked him off. A couple windmill spins and goodbyes from Graveyard, and I was off, my love for metal and easy restroom access dancing like sugarplums in my head.

THE SHRINE + THE PARANOYDS + CAT SCAN @ HOUSE OF MACHINES