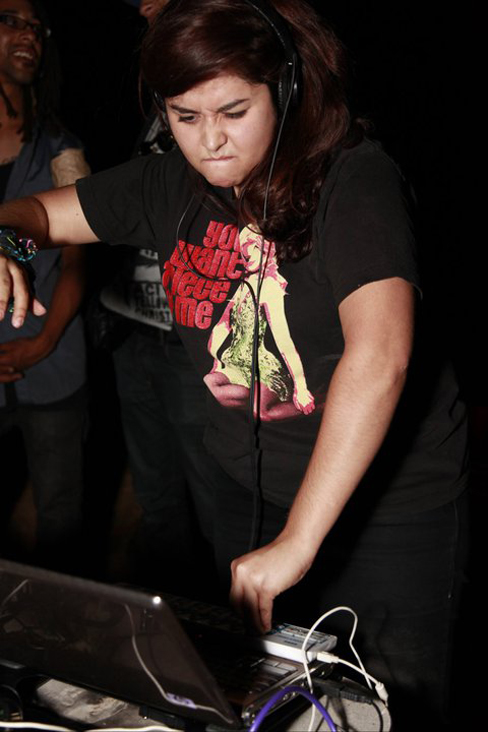 Independence Festival organizers succeeded in convincing a couple-hundred concert goers to drive two hours into the middle of nowhere in the desert, through nearly abandoned rocky dirt roads with only a geo-location on a Google map and waning reception to guide us. Bestial Mouths kicked everything off, and So Many Wizards followed up with an energetic set on the heels of the release of their new Inner City single.  Son of Cecil played next followed by Halloween Swim Team, who got everyone moving to their own brand of synthpop, closing off with Science Fiction, an appropriate track about being in a barren stellarscape at the end of the world, which is exactly what it felt like under the bright lights of the Milky Way amongst the Joshua trees. Festival co-organizer Lou Anda’s long running and consistently evolving project Voice on Tape followed with an eerie yet powerful set driven by his impeccable voice. Holding it down for most of the night on the turntables was DJ Margot AKA I.E. who managed to creep me out while making my ass shake to Goodbye Horses by Q Lazzarus (the Buffalo Bill song from Silence of the Lambs). Everybody was dancing frenetically and at least three different people came up to me and quoted the line “Would you fuck me? I’d fuck me,” which doesn’t stop being creepy no matter how hard you dance. No one can deny the raw power of a Kid Infinity live set–except the generators which were none too happy about all of the energy sucked out by the elaborate light show, and repeatedly shut down the set–but everyone was persistent in their determination to dance. Around 4am Barrie Rose, the singer for Tes Elations attempted to coax everyone back out of their tents, declaring that it was not time for sleeping yet. Indeed the quintet featuring two cellists was hauntingly beautiful, intense and full-sounding. As the sun rose few of us were left standing, and for all my efforts to dull my senses by pounding whiskey with Manhattan Murder Mystery’s own Matthew Teardrop, the power of the rising sun in the desert managed to infuse my brain with a sort of clarity that no amount of substance abuse was able to overcome. All the while, Stab City succeeded in turning a sleepy tent city into a mosh pit screaming into the dawn’s light. Local electro-queen I.E. closed off the lineup at around 6am with delirious and silly dance party action. When all was said and done everyone with an inkling of coherent thought enlisted themselves in the cleanup effort, and as far as I can tell nobody managed to kill or seriously injure themselves. Hopefully Lou, Sean, Margot and their crew of organizers can keep doing these large scale truly D.I.Y events happening for years to come.