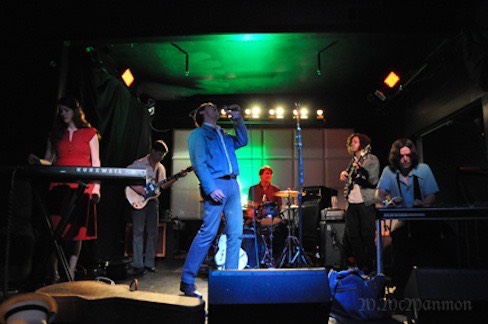 The night air buzzed around The Echo Thursday evening as a celebration of Johnny O’Donnell’s EP release “Masquerade” on White Noise was about to kick off. The evening held an eclectic line up of unique bands with different sounds. Die hard music lovers stayed the whole night and the short attention span LA crowd floated in and out like flies throughout the night. Head bopping and cat calls gave the bands some deserved appreciation throughout the night.

The room slowly began to fill as John Carpenter took stage as the opener. Commanding the room this east coast trio slammed into a tight set. Carpenter’s songs tend to be moody and smooth, with a powerful background punch melodically speaking. The Echo could barely contain the energy that oozed out of the live rendition of “I can give you time” as the band digressed into a trippy jam that rolled into the unreleased closing number “Cleaner Country, Higher Land”. The prog, Euro rock feel of these numbers takes you into the future of the music scene.

Corridor put the word “experimental” into music. Taking the stage with instruments and laptop, this appeared to be a stellar set, and it was in a completely different way than the other bands. Playful sounds coming from samples, drums, keys, bass, and guitar was plenty to create this vibrant wall of sound layering. The textures creating by Corridor’s complex audio fills sends one’s ears into another galaxy. Just when you think you’ve adjusted they pull out an electric cello. This mixture of sound creates anything but playful sounds, hedging on a Dali-esque brilliance.

Johnny O’Donnell took center stage and blew the packed crowd wide open with “The Gothic Singer.” O’Donnell and the band have a unique ability to take you into a masterful amalgamation of Irish, country-twang, folk rock. If Loretta Lynn, Van Morrison, and Bob Dylan had a baby, it would be O’Donnell. It’s scientifically possible…isn’t it? If not, it is musically speaking. John Carpenter joined in with electrifying guitar on “Loose Cannons” and “Roaming Thing” mid set to spice things up. The communal energy continued after Carpenter left. A lovely painter, who much like in Feist’s “Look at what the light did now”, created art to the music in the background. It lent to a tremendous overall creative energy vibe that permeated throughout the night.

Residual Echoes closed out the evening with a sharp acid rock vibe took things to a higher velocity. This three piece played hard and fast, backs to audience on occasion while speaking through their music. The thinned crowd of die hard music lovers shredded along with guitar riffs and a mosh pit defiantly could have been in effect if it had been at The Smell instead of hipster heaven. Echoes don’t play punk, because their songs are far too long, but the ethos is there even if the length isn’t. The final number summed the set up best. The band shredded the hell out of a cover of “Helter Skelter” and then destroyed their instrument set up at the end. A great display of hard core playing evaporating back into the evening’s late twinkling skylight.