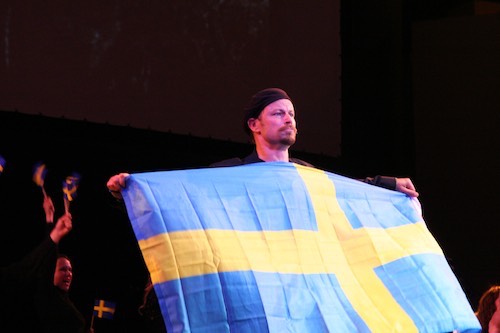 The Seduction of Ingmar Bergman is a work of genius, a fantastic performance piece only the Mael brothers could dream up. Last Saturday night, the Los Angeles Film Festival presented the world premiere of Sparks’ musical at the Ford Amphitheatre, with a humorous introduction by Michael Silverblatt—the man responsible for bringing Sparks and director Guy Maddin together—of celebrated KCRW program Bookworm. Originally crafted for radio, this is the first time the piece has ever been performed by actors in front of a live audience.

The sold out show featured an ensemble of 14 actors, with the Maels themselves acting in supporting roles—Ron as affable Bergman’s chauffeur, and Russell as a charmingly pushy studio executive. As Russell sang, Ron played the keyboards, and the pair were backed by guitarist Jim Wilson and bassist Marcus Blake. Peter Franzen—one of the most respected Finnish actors of the last couple decades—starred as Ingmar Bergman, portraying his angst and confusion expertly.  Ann Magnusen played an absolutely stunning Greta Garbo, who appears towards the end of the musical as Bergman’s savior. Guy Maddin provided stage direction, and also moved about the stage capturing the performance on a flip cam. 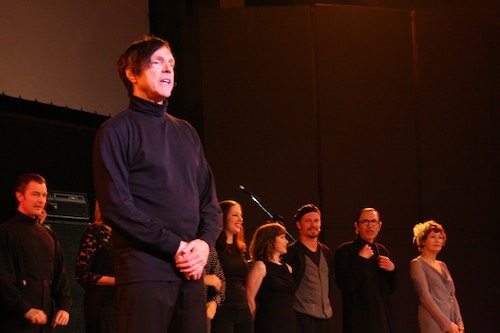 Sparks treated the packed house with a peak into what they imagined would’ve happened if the famed director left his native Sweden for Hollywood. Like all of Sparks’ work, The Seduction of Ingmar Bergman is witty and wild and whole lot of fun. They recognized Bergman’s lesser-known lighter side—yes, not all his films are as serious as The Seventh Seal—which many forget existed. Thus, they chose to start the performance with Bergman winning the unlikely prize of ‘Best Poetic Humor’ at the 1956 Cannes Film Festival for Smiles on a Summer Night. Bergman decides to go for a walk, and all of a sudden feels compelled to enter a movie theater to see “escapist art of the worst sort: a typical American action film.” There, he’s whisked away from his homeland and dumped on the streets of Hollywood, where the drama all begins. He’s pushed and pulled by studio execs and fans to make a Hollywood film—literally, in one scene, where a mob stretches his arms several feet beyond their natural length—and chased by police through the streets of Hollywood. In the end, he’s rescued by a lovely woman revealed to be Greta Garbo, who takes him back into a movie theater and sends him home. 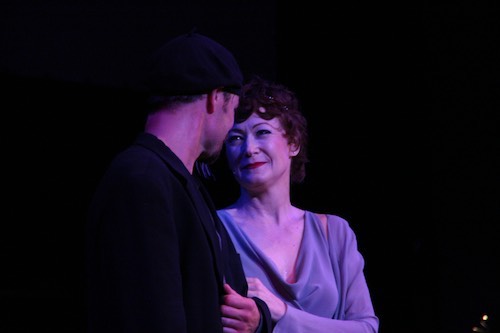 The performance was simple but effective. The Maels made the wise decision to not delve deep into the minutiae of Bergman’s career. All the audience needed to know about the Swedish director was revealed in the first ten minutes of the show; any more details would’ve interrupted the tale, which was easy to follow and flowed naturally. Very few props were used; just an old mid century modern couch, a bed standing upright in the corner, a couple folding chairs and a megaphone. Images of the real Bergman and Garbo were intercut with images of Beverly Hills and Hollywood locales, and close-ups of pages of the script itself were projected onto the massive blow-up screen. 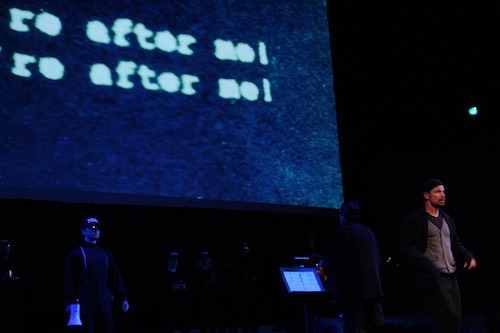 The chase, photo by Lainna Fader

Sparks fans will, of course, love every second of The Seduction of Ingmar Bergman, but those less familiar—or at least less obsessed—will still find much to enjoy here. The Maels have given Maddin much to play with for a film version; if he can manage to recreate some semblance of the magic at the Ford, it’ll be a massive success. The Seduction of Ingmar Bergman was by far the most exciting program at L.A. Film Fest this year.

All photos by Lainna Fader: