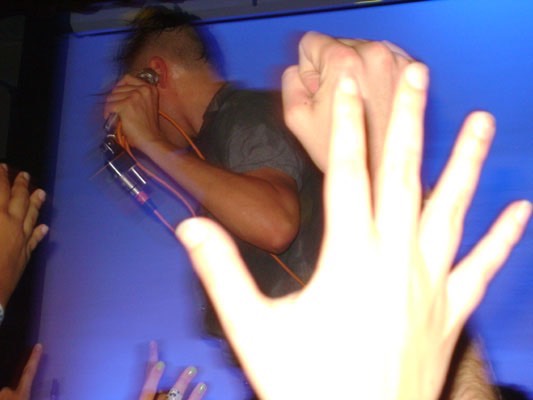 Before the high from the two recent Peter, Bjorn and John secret shows at the Lovely Bad Pad and the L.A. 819 Maple Loft space on January 29th could wear off, Sean Carlson threw yet another FYF secret show at me. Arcade Fire. YES, Arcade Fire—in town to perform at the Grammys—playing at the Ukrainian Cultural Center on February 11th, at 9pm, for a mere $30. AF shows generally range from $80 to $400, and the audience size is usually about 10 times larger than the quaint high school dance gymnasium feel of the UCC. I knew deep in my heart that if I didn’t attend, I would hate music for the next several weeks. The night before the show, at 9pm, clues were released on Arcade Fire’s twitter about where the tickets to this show would be sold. All 3 pictures contained zipcodes, and (extremely obvious) “clues.” People immediately lined up and camped out at Fingerprints in Long Beach and Origami Vinyl and the El Rey in Los Angeles. I thought I was doomed, but thanks to some fantastic friends who were about 10th in line, I was able to get tickets (and I almost peed my pants).

Arriving at about 8pm, I ignored the free cotton candy, soda, and water, heading straight to the floor. There was already a large crowd so I devised a plan for my friends and I to get closer to the front. We laughed like Scooter Rechid, the surfer from Spongebob, and, in an effort to get away from us, the crowd parted. It kind of worked, but we ended up being behind some guy that would not stop farting. It seemed like we only stood there for 5 minutes, and around 9:05 Arcade Fire walked on to the stage and their energy was immediately palpable. After standing in line for 10-15 hours, the audience of die-hard fans became a single entity screaming their heads off.

Arcade Fire started out with “Month Of May” from its new album The Suburbs, first released on a double-sided single on May 27, 2010 (One day after my birthday. Destiny). Approximately 90 percent of the audience sang along and danced to this fast paced song, and it was the perfect way to start out the show and get everyone going. Arcade Fire’s obviously top notch equipment combined with the band’s talent and blatant passion, made an absolutely perfect sound. It wasn’t loud at all—it was as if we were in the recording studio with them. The band went right in to the classic “Rebellion (Lies)” from its first album Funeral, as everyone cried out, not expecting one of their “old ones.” We all sang along, calming down our dancing to belt it out. Even though this song isn’t as upbeat as the first track they played, the crowd still cheered and danced with deep infatuation for the live music that graced our ears.

Once the song ended and the crowd quieted down, Win Butler said his thanks as they switched their instruments around, and told us “It was below 10 when we left Montreal, so I can honestly say we’re extremely fucking happy to be here.” After these uplifting words, they went into “Neighborhood #2 (Laika),” a song from Funeral which we all once again went fucking crazy for. The sound of everyone singing along almost brought me to tears, but I felt stupid so I stopped myself. The strings on this song sounded phenomenal, while the percussionists played drums on anything they could hit, including the stage scaffolding. They then played one of my favorites, “No Cars Go,” from the band’s 2nd album, Neon Bible. I was happy to hear Regine Chassagne’s cute voice clearly, and extremely happy to hear the whole crowd screaming “HEY!” and “LET’S GO!” whenever Arcade Fire did so. I can’t even express how fun that was. Win threw an open water bottle at the audience, and Regine then gave us more when they played “Haiti,” from Funeral, singing in scattered French and English, beautifully. I sang along because I speak French, and it was funny to hear people trying to sing along to this one. Arcade Fire played “City With No Children” next, off The Suburbs. Surprisingly, a lot of the audience knew these lyrics more than they did with “Haiti,” but it was again pleasing to hear everyone singing and clapping along. Win then mentioned that $1 of every ticket for this show was going to Haiti to “bring baby Doc to justice” (learn more here). Yet nothing compared to the excitement that their next song, “Intervention,” incited—the first track released off Neon Bible. Being one of my favorite songs (ever), I almost cried again. Everyone sang along solemnly, yet Win’s heavy vocals were still heard impeccably. The band followed with the first track off of their first album, “Neighborhood #1 (Tunnels),” as the audience went utterly insane. I kept trying to snap pictures of Win during this song, because he sings it so passionately. Next up was another new song from The Suburbs called “We Used to Wait.” As soon as the keyboard was heard, we all knew what was coming, as this is one of the most popular songs on the new album. It reminds me a lot of the Funeral sound, dramatic, powerful and hopeful, and maybe that’s why it’s so well-liked. They then played another from The Suburbs, “Suburban War.” This song has amazing percussion and, being a drummer, I definitely died for it. The guitar sounds very ’60s, like a Byrds song, and the lyrics are also reminiscent of that era. After this, Win said “If you camped out you’re fucking crazy,” and they played their most well known song, “Wake Up.” We all freaked out some more. Everyone was singing, and it was an emotional experience that we all cheesily shared. Then it was over.

Just kidding. They gave us an encore after 2 minutes of being backstage, since we clapped and screamed until they came back out. They played “Ready to Start,” off The Suburbs, like the show was starting all over again and everyone happily sang along with this successful encore. Then came another exciting upbeat classic, “Keep the Car Running,” with those exciting drums that made everyone whip out some ’80s dance moves (or at least I did). Arcade Fire ended this surreal show with The Suburbs song that I literally listen to every day and fantasize about performing, “Sprawl II (Mountains Beyond Mountains).” This song is so ’70s disco in the best way possible, and I believe we all danced harder than we ever have. When I saw Regine getting ready and I heard the synths, I couldn’t help it and said, “Are they going to play Sprawl II?…FUCK YES!!” Regine danced in another one of her gorgeous sequined dresses and tossed her giant rainbow pompoms around as the lights flashed, and Win continuously said “Cut the lights….CUT THE FUCKING LIGHTS!”—which are lyrics from the song, but he was fucking serious. The lights cut and the show was sadly over.

What j’adore most about Arcade Fire is the band’s endless passion for music. The musicians love the songs just as much as their fans do. A lot of bands I have seen (which is A LOT) just seem as if they’re going through the motions of playing another show. Arcade Fire plays like it is the last time they will perform, with the smiles, gratefulness, laughter, and energy of young children playing together. All I can hope for in life is to fall in love with an amazingly talented man and be in one of the best bands ever with him, to be my own Regine and Win.