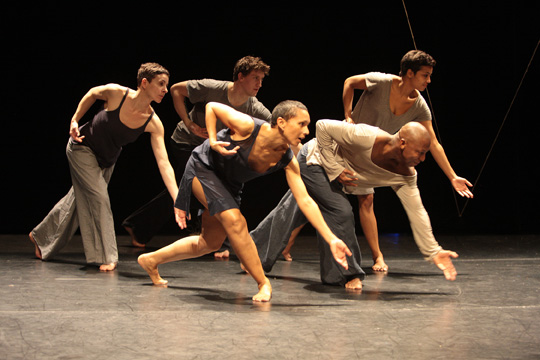 San is a genealogy of the Khoi-San people performed with movement. Choreographed by Vincent S.K. Mantsoe, San integrates moves born from street dance or borrowed from pop with the ancient rhythms of Mantsoe’s family of spiritual healers. The story starts with the beginning of humans and ends in the dystopian now, an intensely emotional evolution that follows the Khoi-San from freedom and wandering to expulsion and execution. A minimal stage design of criss-crossed twine creates an earthy geometry that recalls constellations or migration charts or the lines the dancers make as they convulse and percuss about the space. The show starts in silent darkness that slowly reveals five characters hanging, necks pressed into the twine as their bodies lean and sway with great agony and deliberation until the sound and the story take flight. The score is also stark—the unbelievable undulations of Iranian Sufi music master Shahram Nazeri’s voice interspersed within the 12th-century poetry of Rumi. The only improvement I could imagine for this performance’s presentation would be live performance of the score. San presents five dancers who react to one another’s presence and performance like family. Portraying love and brutality with equal elegance and passion, the dancers of San relate a million years in an hour—tracing the steps of the first-ever humans with contemporary gaits as Montsoe’s choreography compresses time and space into a tiny black box theater in downtown Los Angeles, California.