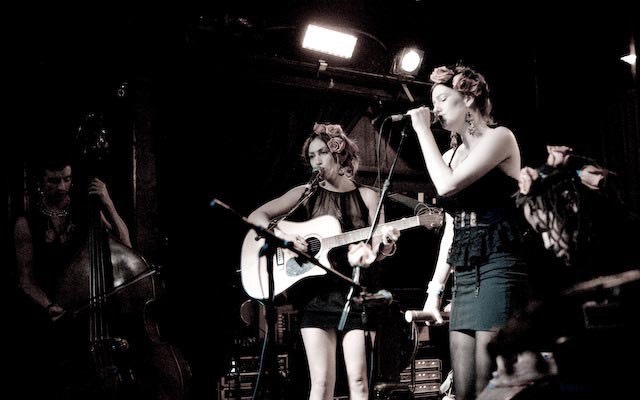 “Pickin’ daisys on a Sunday I’ve forgotten to pray…” begins the first song of the set. The two girls, dressed in black lingerie-inspired outfits, roses in their hair, sway slowly, disquietly, their deep voices swirling around like ebbing rings around a pebble in a pond. Abilene Fawn and Andi Blair harmonize on haunted songs that conjure feelings of nostalgia, longing, romance, and regret. They sound great lo fi. They sound like they’re wandering between the cracked grooves of an old record in some old town overgrown with foliage—daisies, roses, maybe some shattered stained glass. The songs and tones describe broken hearts, breaking hearts, resting in a peaceful garden but not far from a cemetery and all too familiar with places to make love. If you see these gals off-duty, shining brightly, ringleaders of fun, it’s intriguing that they step on stage and get so deep and mournful. While Sundays Soundtrack is a regular at Echo Country Outpost, this was the band’s first show at the Echo, sandwiched between Horse Thieves & Henry Wolfe, all together making for good reminiscing on lovers gone and lingering. Oliwa and James Bookert on bass and slide guitar, respectively, accompanied Fawn’s acoustic rhythm guitar as she and Blair looked into each other’s eyes and shared secrets.