THE MOST FUN I’VE EVER HAD WITH MY PANTS ON: DREW DENNY 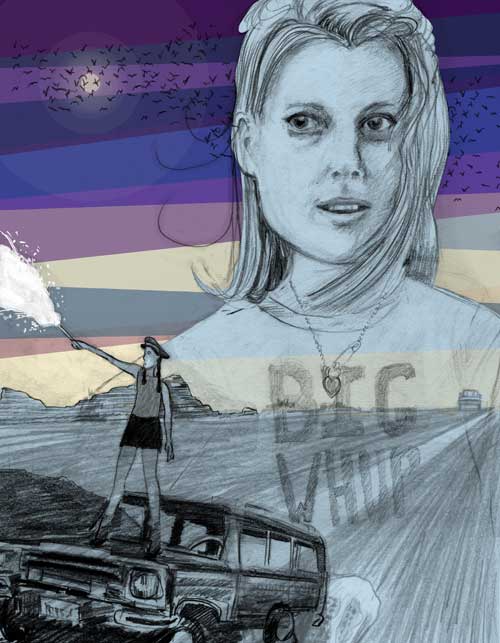 Normally I try to stay objective when interviewing people, and to leave my own personality out of it—but Drew Denny has been a good friend and an inspiration to me for a couple years now, first as an L.A. RECORD writer, then as a musician and artist, and now as a filmmaker. Watching a rough cut of her upcoming film, The Most Fun I’ve Ever Had With My Pants On, was almost tear-inducing, not solely because of the complex emotions of its semi-autobiographical characters, but also for its vivid beauty, which almost slaps you across the eyes, demanding you soak it all in. And it’s a road trip film, a buddy saga that pairs up Drew with actress Sarah Hagan, who played Millie in Freaks & Geeks as a teen and recently starred in the Sundance hit Jess + Moss, directed by Clay Jeter, who also produced this film. As is her wont, Drew’s been super busy of late, finalizing the film while continuing to work on her art, her writing, and her new all-female French-tinged pop band. We finally both found time around midnight on a Wednesday at her place in Highland Park. After a hefty couple of swigs of whiskey and a strange Swiss moonshine she’s brought back from her travels, the interview was going great! I got so into the story of the film that, by the end, I was personifying some of its characters’ most misguided goofs … This interview by D.M. Collins.

THE MOST FUN I’VE EVER HAD WITH MY PANTS ON DEBUTS ON WED., JUNE 6, AT THE SEATTLE INTERNATIONAL FILM FESTIVAL. FUNPANTSMOVIE.COM AND FACEBOOK.COM/MOSTFUNPANTS.

KERA AND THE LESBIANS ARE BRINGING DUENDE BACK