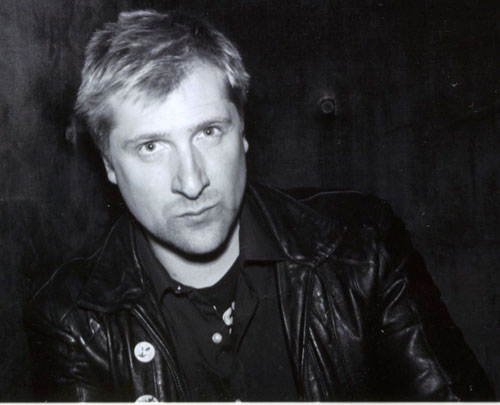 Justin Maurer of Clorox Girls vs. tortas, toilets and ball-punchers in this excerpt from his upcoming chapbook, “Seventeen Television,” out on Vol. 1 Brooklyn–soon!

The tiny Mexican hairdresser moved swiftly, waist and pelvis well ahead of his feet. I kept him at bay with my beer bottle and outstretched arm, offering a clink against his bottle. I managed to continually maneuver around him at arm’s length.

“No, somos amigos,” I offer. “Salut, mi amigo.”
“I thought maybe you were interesting person,” he asks me.
“I am an interesting person Enrique, just in other ways,” I say.
“What kind of ways?” He continued to move closer.

This was his storage room. Boxes were stacked around the place, and a rumpled futon lay in the corner. A few lines of pure Columbian cocaine were prepared on a table, but he was trying to get me onto the futon. Lucky for me, I was about two feet taller, with a reach of about three feet. This continual cheers-ing seemed to be working. I kept my right arm outstretched as my hairdresser deflector.

Enrique finally relented. “Do you want a line,” he asked.
“No thanks,” I said and made a beeline for the door.

In the other room, the rest of my band was partying with Las Ultrasonicas. They were throwing back ecstasy, cocaine, weed, hash, cigarettes, beers, joints, and tequila with nonchalant Chilanga abandon.

The day before, we’d been exploring the markets around El Zocalo, Mexico City’s main square. One narrow cobblestoned street would have plumbing supplies and PVC piping for sale, the next birds and birdcages, the next pirated CDs and DVDs, the next racks of clothing, and so on. It was mad and incredible, as if the Yellow Brick Road had the sights and smells and sounds of Mexico City. In essence, it was 50 million Chilangos living life their way.

The Spaniards tore down the Aztec temple on the Zocalo and defiantly built a Catholic cathedral on its ruins. Today, this cathedral offers bloody visions of Catholicism. They have bloody tears of the Virgin Maria. Gorgings of saints. Whippings. There’s of course the thorned crown upon Christ’s head, and finally the nails and spear wound of El Hijo de Dios, Jesus Cristo. No art for the sake of art here.

Around the corner from the Zocalo and the markets there was a torta shop owned by a former Mexican wrestler, the mighty luchador Blue Demon. Inside we snacked on a few tacos al pastor and a quesadilla de huit la conche. This is a corn fungus, a distant relative of a mushroom that’s edible after it’s cooked. The sabor is incredible.

A tiny man with a pleasant demeanor and well-worn skin approached us and asked in polite broken English how we’d heard of his place. We hammed it up a little.

“We are big fans of luchadores and Blue Demon was muy grande, el master de todo.”
“I am Blue Demon,” he exclaimed, beating his breast. He motioned to his wrestling uniform framed on the wall. It shimmered like the magic red slippers on Dorothy’s feet.

We foolishly accepted his challenge, and after a few beers the inhuman torta arrived. It contained three types of meat, mystery dressings, avocado, tomato, lettuce and peppers between a huge loaf of bread. This sandwich was as long as my arm and about five times thicker.

My friend and I attacked the enormous sandwich and attracted a few bystanders.
“Los pinches gringos comen demasiado.” (The fucking gringos eat too much)
“Vamos, los gringos van a morir.”(Let’s watch, it’s going to kill them)
“Mira, los pinches gueros no pueden comer esta torta.” (No way can these fucking white boys finish eating this sandwich)

A good twenty minutes in, we were ready to surrender. A mariachi four-piece stopped playing to witness the final verdict. Children in sandals, stray dogs, old people, other diners and Blue Demon himself were now in whispers to see if we could do it. My stalwart companion gave me a look and darted to the bathroom. The place erupted in riotous laughter.

In my mouth went pork, bacon, carne asada, roasted peppers, bread, avocado, and some other things. I chewed and chewed. When I couldn’t chew anymore, I just swallowed. It was the last unholy bite—I was determined.

“Salut Blue Demon,” I said. I placed the last fistful of torta into my mouth and swallowed. It felt like it was going to come back up, but I held it down. I took a gulp of my chelita and said, “Gracias, señor.”

The place erupted. I was congratulated ferociously. Bottles of tequila and mescal were placed on the table and uncorked. A bucket of beers—on the jefe—were placed on the table. The mariachis began to play and sing. My friend appeared green-faced. Someone gave him a beer. Blue Demon gave us a card with his name and address inviting us for drinks. We had found the Wizard of Oz.

Much of the next day was spent on the toilet. In Mexico City, toilet paper can’t be flushed, so the bathroom wastebaskets are full of recently used toilet tissue. Along with the altitude, this makes a prodigious hangover even more monumental.

That night our punk band, Clorox Girls, was opening for Mexican sensations, Las Ultrasonicas. They’d picked us up from the airport a few days earlier in their tour van. Three Mexican women about ten years our senior. They glimmered with madness.

Our budget hotel’s primary residents were transvestite prostitutes and their businessmen patrons—but it was close to where we were playing. The venue was run by the mafia, so they paid off the police to stay away. The mafiosos ran their own door, security, and bar. We were glad the girls from Las Ultrasonicas knew them mafiosos and were handling our getting paid. We wouldn’t have asked.

We were scheduled to go on at 11. The place was a seething den of Chilangos. Some of the kids were smoking crack in the bathroom. Everybody was ready. The place seemed primed to tear itself apart.

Initially, we had our backs to the crowd, and some guys thought we were girls and started to wolf whistle. When we turned about face, they began berating us, “Pinches putos! Gueros! Maricones!” (Fucking faggots, white boys, limp wrists!)

We tore into our set and a group of guys with baseball hats decided to punch me in the balls. The stage was at a medium height, so it gave them a perfect vantage point to ruthlessly pound me in the gonads again and again—they had a perfect angle. I responded by knocking their hats off with the headstock of my guitar and kicking at them. The crowd loved it and some started yelling, “Mata los putos gringos.” (Kill the white boy faggots.)

I asked for a drink of someone’s beer between songs and they drenched me from head to toe. My hair, T-shirt, and guitar were soaked, absolutely sticky, sopping wet.

I peeled my red T-shirt off. It was one of my favorites, an 80s Marvel Comics tee that read, “Mutant Maniac.” The group of ball punchers grabbed it and began taunting me like a bull fighter would a bull, jeering, “Toro! Toro! Toro,” while waving my stolen shirt like a bullfighter’s cape.

We finished our final song and I dove shirtless into the crowd in a desperate attempt to get my favorite shirt back. “Mata el pinche gringo,” the crowd yelled. (Kill the fucking gringo.)

They tossed the shirt to a girl. When I tried to grab the T-shirt from her, she tucked it under her shirt, and bit down onto my left hand, almost drawing blood. I had to slap the girl to get her off me. Into the microphone, I pleaded with the crowd in my best Spanish which was pitiful at best.

The T-shirt materialized and was handed up through the sweaty throng. I had been triumphant. Life is full of failures so I live for these small victories.

After the show, we went to a party at a celebrity hairdresser’s posh flat in the trendy neighborhood of Coyoacan. Artists Frida Kahlo and Diego Rivera had lived across the street. He cut everyone’s hair including musician Ricky Martin and actor Gael Garcia Bernal.

That was when he tried to rape me.