NEVEREVER: TOO MUCH OF EVERYTHING 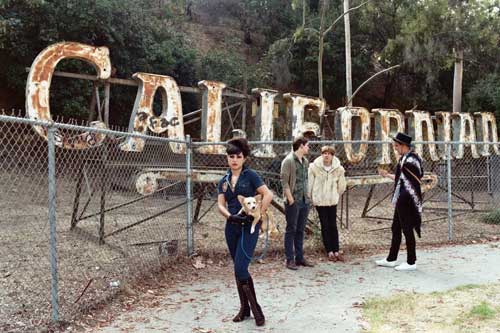 The ennui of off-season cheerleading practice, lifeguarding to save up for a longboard, scheming to elope to Tijuana with my summer camp sweetheart: I can just recall July at sixteen. Neverever have made themselves strangely at home in that moment.

While debut Angelic Swells (Slumberland, 2010) was rife with school year angst, the band’s new EP evokes the agony and ecstasy of summer vacation. But in the tradition of fellow Angelenos Suburban Lawns, Neverever’s kitsch is freed from nostalgia by the grotesque realities of adolescence. Shake-a-Baby is uncomfortable like a sunburn, a crashing sugar high or the marks of a suction-heavy makeout session.

Jihae Simmons Meek delivers elaborately narrative lyrics in her signature, slightly flat style, starting with “Baby Oil and Iodine,” a raid on Mom’s bathroom continuing from Swells’ repurposed “Coconut Shampoo.” Next comes a paean to ‘70s surfing legend, sugar fortune heir and 27 Club member Bunker Spreckels, whose good looks and decadent recklessness make him the shoe-in poster boy for Nevereverland. The call of the those foghorn keyboards meets a response in “Venus”’ reverb-heavy steel, which makes a wistful serenade for a “sunset over the rose bed,” while the mod bounce of “Wedding Day” punctures its teen bride fantasy with the threat of a murderous fiancée. In “Mexicoco,” help-me-rhonda harmonies sprinkle camp over an ill-considered cross-border jaunt: “Everything was beautiful and seemed so right, except that I was there with you and would be all night.”

It’s more Cramps than Rosie, more Fast Times than Gidget—and all in lo-fi recalling the dog days of all-ages venues and bratty garage acts on local radio. Few of us would wish to relive that teenage confusion, but it’s charming to revisit. They’ll perform this Sunday at L.A. RECORD’s L.A. Zine Fest afterparty, and their new EP Shake-A-Baby is out now on Slumberland. This interview by Bonnie Johnson.

Are the new songs on Shake-a-Baby a continuation of the music on Angelic Swells?
Jihae Meek (vocals): The first album was about intense teenage emotions and melodrama and stuff—the newer songs are getting more toward teenagers who are growing up and reluctantly having to face things that they don’t want to.
Wallace Meek (guitar): I think some of your words are surreal, that’s what I get. It sounds like it’s just pop music but if you actually listen—we’ve got a song on our first album about incest! I don’t think anyone even picked up on that! It sounds so bubblegum.
Jihae: When you’re a teenager everything IS kind of surreal, because you do all these crazy things and when you look back you’re like, ‘I can’t believe I did that.’ You think you used to be such an asshole because you couldn’t control your emotions very well. If you’re into something as a teenager it’s the only thing that matters, and when that goes wrong it’s the end of the world.
What makes Southern California imagery so powerful for you?
Wallace: I think bands should sound like where they’re from, because that’s where they live and they take on everything that’s around them. When I moved here I recognized things from my misspent youth watching skate videos. And when you’re in L.A. you go to the beach!
Jihae: I went to art school in Scotland—that’s when I met Wallace—and I was really, really homesick for southern California. Scotland’s kind of the opposite of a lot of stuff here. The weather there—and the culture—is really different. People don’t spend a lot of time outdoors sunbathing. It’s more like … stay in drinking and taking drugs and things that can get really depressing if you’re homesick and not used to that. I think when I moved back I was super appreciative of all that stuff, and now I never want to leave!
Is there anything from your time as an art student that inspires your songs now?
Jihae: I did mostly installation work and a lot of it was really theatrical and surreal—like maybe our music is. A lot of it was tapping into the subconscious and dreams and didn’t make a whole lot of sense, but I wanted people to relate to it in a way that was emotional—not something so conceptual that you had to be an art student or an artist yourself to understand it. Everybody can relate to it in a different way, whether it’s what the artist intended or something completely different that’s personal to them. I did one video project where I built a fort out of sheets and there was a plastic baby that I had coming out of my mouth, but then we edited it so it was going backwards and going into my mouth . . . I guess it sounds really weird!
Your songs invoke something bygone—perhaps a longing for a simpler time?
Jihae: I think as people we’re just kind of frustrated with the way that a lot of society is now days. People are caught up in things that are so distracting, things I don’t understand. Like all the social media and the Internet in general. Things get watered down when there’s too much of something, and there’s too much of everything. I think our generation is lost in a lot of ways, like even the way that people graduate from universities and used to be able to get really good jobs. Now, what do you do? It doesn’t really count for much. We’re all in that position. I don’t think we mean to make a social comment about all that, but it just kind of comes through.
Which songs are your personal favorites? Or crowd favorites from Shake-a-Baby?
Wallace: People keep really liking ‘Wedding Day,’ and they keep saying it sounds like Blondie, which is cool.
Jihae: I think we both like ‘Venus’ a lot because it’s really different from the other stuff we’ve done—I guess more a studio track than something we would play live. More like an epic psychedelic dreamscape. It was really funny when we recorded our album because some people were saying, ‘Oh, they’ve gone all hi-fi and slick now! The first single was all lo fi and we miss that garage feel.’ We’re like, ‘What?!’ It just didn’t make any sense to us ‘cause we don’t think that anything we’ve done so far is at all hi-fi—even though we’d like it to be.
Wallace: I really love early Creation Records stuff, and people try and imitate that sound but the only reason they have that sound is because of the limitations of the recording. Or even Flying Nun stuff . . . you’ve just got to do what you can do!
You’ve staked out pretty different territory from your old bands—The Royal We and Bricolage, and from Royal We spinoff Veronica Falls. Why?
Jihae: In The Royal We we all had really different tastes and ideas about what we wanted. Some of what I was into came through, but a lot of it wasn’t necessarily what I would’ve put into my own band—kind of a combination of punk and twee and stuff that maybe was more Glasgow sounding than L.A. In Neverever, Wallace and I write most of the songs together, the rest of our band helps as well but it’s mostly our thing as a partnership. The music we make now is more what I’ve always had in mind.
Do you think you’d fit in with old school SoCal groups like the Honeys and the Murmaids?
Wallace: I dig Murmaids producer Kim Fowley—also SoCal stuff like the Plimsouls and Bomp! Records.
Jihae: I think we’d also fit with SoCal-ers like Sparks and Brett Smiley. I’d love to hang with the Honeys—Marilyn ex-Wilson’s meant to be one the coolest people you’ll ever meet.

V. VALE: OUR JOB IS TO FIGHT
IGGY AZALEA: THE ILLUMINATI HE...