He will DJ tonight at Big Freak. This Interpreter curated by Lainna Fader." /> L.A. Record
Menu 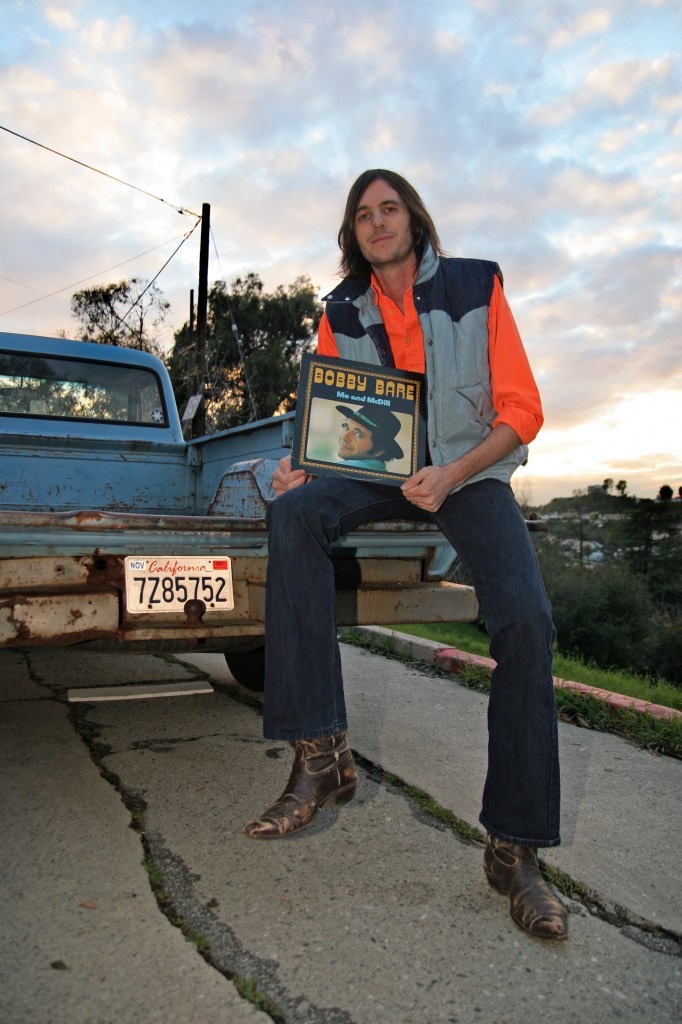 Chad Brown knows more about country music than anyone you’ll ever meet and DJs what he calls “the real American soul music”—music that comes from places where you can’t park—all over the world as DJ The Lonesome Cowboy. He makes music of his own as CB Brand and served as music supervisor for Michael Winterbottom’s The Killer Inside Me. He will DJ tonight at Big Freak. He recently starred in The Oregonian with Jed Maheu of the Small Town Talk DJ collective, which will premiere at Sundance. Chad does not listen to music made after 1986 and details his favorite country records below. He DJs tonight at Big Freak at the Black Boar in Eagle Rock. This Interpreter curated by Lainna Fader.

“The thing about this is if you’ve never been to a rodeo, and Cheyenne Frontiers is the big daddy of them all, you can listen to this and go to a rodeo. Hank Thompson is one of my favorites. The smoothest vocalist ever to grace the country music field. World War II veteran, went to Princeton, super-brainiac. This sounds like a rodeo. This guy Chuck Parkinson is on it as the radio announcer. Picture them in front of this whole arena on a grandstand, Chuck Parkinson’s talking, and they mix it really great. Tex Ritter, who’s John Ritter’s father, recites ‘Cowboy’s Prayer’ on the beginning of side two. Out of the gate—no pun intended—this thing gets you into the country world. This is west coast we’re talking about.”

WYNN STEWART AND THE TOURISTS SOMETHING PRETTY (Capitol, 1968)

“This will get the tumbleweeds rolling. The dust is in the air. Wynn was one of these guys who was an architect of the Bakersfield sound. Merle Haggard, Wynn Stewart, Buck Owens, working together up north of Bakersfield across the river in Oildale. This is a Telecaster guitar. Drums. Electric bass. Really pared down. Wynn’s just the best. He’s probably 5’7”. Most pictures have him in these crazy polo shirts, this cute guy. This is from 1968, so it’s very topical. Like ‘Good Old Fashioned Love.’ It has some nudge nudge, wink-of-the-eye references to guys that look like girls perhaps. It’s great for cocktails, hunting trips, that kind of thing. His entire catalog is just the best. It goes from really hard-boiled, badass, almost rockabilly in his early career, and in the ’70s he liked to clink the drink. This has always been one of my favorite records, and I bought it in Nashville.”

“You may have heard of him from his big hit, ‘Sunshine.’ He’s right up there with my favorite unknown guys. This guy has been very quiet. Like the Alan Alda of country music. This is the sound of western Massachusetts. Jonathan Edwards went to a farm there in the early ’70s and got signed to Atco. This album, the title track, will blow your socks off. Every single track all down the line. Side two, track one—‘My Home Ain’t in the Hall of Fame’—is the great lost country anthem. Instead of drinking whiskey, this is more like drinking homemade apple juice in the Berkshires in a hot air balloon. His entire catalog is incredible, but this album, by far, will clean your barn, even if you don’t have one.”

“Now going from western Massachusetts, we’re heading down the Gulf Coast. This is an album that was on RCA. After years of kicking around these hardcore honky-tonks, this is a breakout album for him. He had three top ten hits on it. He’s got this vibrato vocal. The way I could describe it best is his vibrato will blow away any hangover or ill feeling one might have. His comet burned really bright and then faded out. He was almost bowled over by his success to the point where he retreated to his trailer park in Florida and became very hard to find. In 2003 his son-in-law and best friend went to find him and found he shot himself in the neck with a gun. Gary Stewart was always in my life, growing up on the road. He was always on my mind; his music’s always stayed with me. An angel who flew too close to the sun.”

“The only female in my top ten tonight. Though of course all the ladies are in my top ten. This is her breakout album. She looks absolutely fetching on the cover, holding a rose, probably in Tucson or Sedona and the wind’s going through her hair. Crystal Gayle is Loretta Lynn’s sister—the youngest sister in the family. The way this album sort of melded itself into my heart … any kid when I grew up would’ve been into this lovely creature. She’s still lovely. The cover photo looks like if American Apparel made costumes for ‘Little House on the Prairie.’ This is in my top records because I was in New York City DJing this party two years ago and it’s 5 AM—this guy gave me a bunch of cash, booze, cigarettes. I was walking back over the Brooklyn Bridge listening to this album with my headphones on. If you can’t listen to this walking over the Brooklyn Bridge towards Manhattan ready for the world to get better in your ears and not fall in love with this city … This is cosmopolitan country at its best.”

“This is pretty rare. It goes back to this guy George Strait. He’s had the world record for number one hits—like 57 number ones, more than Elvis, any European artist, the Beatles. Before George Strait broke out he was in a band called Ace in the Hole Band, put together for D Records’ summer picnics or something. The A-side is ‘Lonesome Rodeo Cowboy’ and the flip side is ‘(That Don’t Change) The Way I Feel’—an unknown lost gem of a country song. This should be on the radar of any living cowboy—anyone who’s ever gotten the wind blown across them at a truck stop at a freeway. This song will make you want to fly away. As a one-two punch, this 45—I’ll match it up against any 45 in the world in terms of the motion. It just makes you feel so darn good.”

“Speaking of lost loves and living on the road, our man Bobby Bare. It’s called Me and McDill because it’s Bobby and Bob McDill, who’s a very awesome songwriter. Bob McDill wrote every song on this record and co-wrote one song. It’s like poetry. Kind of almost coming back from George Strait thing. Very wholistic viewpoint of the country lifestyle in a very laidback way. Recorded in Music Mill. This album sounds like clamshells in a Southern parking lot popping under the tires of a car. He even looks relaxed. Maybe some brain basil with a side of french fries. This album’s been with me for a long time. It’s one of the forgotten Bobby Bare albums. Sad blue eyes.”

“Similar guys—cohorts—interesting fellas. Terry Allen in Lubbock, Texas. Terry went to Chouinard, which is now CalArts, in the ’60s, so he spans the visual arts and country music field. He’s been making country music since the early ’70s with the Panhandle Mystery Band, whose music director is Lloyd Maines, whose daughter is Natalie Maines, who’s in the Dixie Chicks. Incredible, right? The Maines brothers band backs Terry on most of his records. It’s one of these road albums. Through Terry’s music is this constant pumping piano, this boogie—Leon Russell style. The songs are all very topical. ‘Heart of California.’ ‘Cocaine Cowboy.’ Cover of Chuck Berry. My favorite is ‘Feelin’ Easy’ on side two. I’ve listened to this many times driving from Los Angeles out to the high desert and that’s how I felt and ended up after listening to this record out there. High.”

“Buddy Red Bow was the first guy to get inducted into the Native American Music Hall of Fame. The second was Jimi Hendrix, shortly thereafter. I discovered this about ten years ago and it’s always been a staple in my DJ set. Just traveling around—that’s the thing about country music, it’s always about travel. It doesn’t matter where you go in the world. People have this affectation and fascination and affection for American country. … It’s a tragedy what happened to these native peoples. This starts out at an Indian reservation and starts to break it down, goes all the way through love and loss, songs of the reservation, songs of country living. I can only imagine these guys playing back when there wasn’t Indian casino reservation restitution. It was a very hard life. I remember as a kid, growing up in northern Arizona, the Navajo reservation had some really kickass country bands. Growing up with Waylon Jennings on the TV, ‘The Dukes of Hazzard,’ the urban cowboy movement. These guys are the real deal, but they couldn’t play anywhere other than the reds because it just wasn’t happening. The penultimate track, one of my favorite tracks, is on here called ‘Indian Love Song.’ It’s a really beautiful honky-tonk song and the refrain and chorus is sung in Lakota—probably the only country song sung in a native tongue that’s up there with Merle Haggard.”

“He’s gotta be in every top ten I ever do. He’s just the best. It’s hard to grab one album by this dude. He started out in the Texas, Buddy Holly, Terry Allen, Lubbock—the whole nine yards that brings these guys together. They all started out from these hard scrabble places, these country guys. Most music from the heart comes from a place that has no parking. I pulled this album because pound for pound, song for song, it’s excellent. It’s got this groove that just doesn’t stop. It has this constellation on the back because it’s a very cosmic album. It’s a passport to good times.”

THE INTERPRETER: WINTER AND TRIPTIDES