NOBUNNY: TIME TO GET A MOUTHFUL OF SHIT 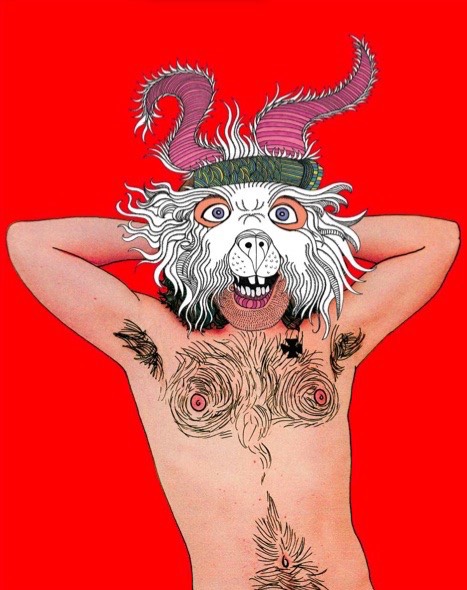 Little bitty Nobunny came into the world in love with love and celebrates his 10th birthday this Easter by performing at the Playboy Mansion with some old-school bunnies this spring. He is playing L.A. RECORD’s NOBUNNY LOVES YOU! show and if you need love L-U-V you better get to it on Feb. 11 at 6th St.! This interview by Drew Denny.

I haven’t gotten to hear First Blood, but I like the title.

I don’t know if you know but I am a fan of the book First Blood, which came out before the movie. Not that I don’t like the movie—the idea of first blood on multiple levels including the idea of the attack and the girls’ blossom in sexuality and the fact that I thought a lot of people were gonna hate it—

Why did you think people would hate it?

Cuz people gotta hate. It’s my time to get a mouthful of shit. You just have to watch for these things—it’s not rocket science. Some people like it I guess. I’m thankful for that.

Do you get antsy when you’re sitting still?

Are those your Christmas cards? Valentines you’re sending out?

Yeah for sure. Buds enough. Trying to think what else is going on … real talk besides burning paper. We went on tour together a couple months before he died. We went on the Shattered tour—he took us which was really nice. We were supposed to work together—he was gonna put out the next album. That was the plan, I suppose, but whatever … that doesn’t really matter, I guess. It doesn’t matter to me if it doesn’t matter to you—

If it’s all equally inconsequential, let’s talk about fights. I always liked to see Jay Reatard play cuz you never knew what could happen. Like at your shows—sometimes people are jumping up and down together and sometimes they’re beating each other up.

We had a pretty crazy fight at our last show in L.A. between three of our super fans, I guess you could say. Two against one kind of claiming the title of who was the bigger super fan. It got pretty ugly. I don’t know if you saw it. I’m not sure exactly how it started. We were just terrible. Our guitar broke—on the very first song we were outta guitar. So then I did an a capella tribute to Captain Beefheart who had died that day, but no one really seemed to care or notice. Then these three girls who are all really well known hardcore Nobunny fans— some of the nuttiest Nobunny nuts we got out there—I guess they weren’t getting along. I still don’t really know how it happened but there was bloodshed and brutality. It was really violent. Technical meltdown show ended in violence. There was hair pulling but actually the part where I even like stopped—just a little roughhousing, I just play through it but it was pretty insane. One girl was hanging off the stage on her head backwards and this other girl was grabbing her by the hair and kneeing her in the face. Another girl was onstage just kicking blindly into the audience with boots on. It was just too much. Too much drugs and alcohol, I think. Not enough peace ‘n’ love.

Did you know that you would inspire such feistiness?

I can’t lie—we just played with Big Freedia on New Year’s Eve in Chicago. I’ll tell ya, Nobunny nuts got some catching up to do with Big Freedia’s freaky fans. Just a blur of people trying to out glam-costume each other. Super fun.

When did you start wearing your costume?

Well you know… costume? I don’t know what you mean by that! I’ll tell ya this band’s been going on ten years—it’ll be ten years on Easter. I don’t know when Easter is this year but I think April 21st we started in 2001. Ten year anniversary coming up on Easter. We’re playing the Playboy Mansion which I am very stoked about. Dreams coming true! We’re going on tour right after that, but I kinda think why bother? Just retire after that. It’s like going to the moon and eating an egg on it—like starting a rock ‘n’ roll band then playing the Playboy Mansion. What are you supposed to do after that? I guess I’ll have to figure that out after Easter. It’s still not clear how many people we’re gonna be able to get in or how public or how Nobunny fan based-ish it’s gonna be, but I’ll be there. There’ll be some bunnies there. Bringin’ the bunny to the Mansion for Easter—you know, ten years. And we’re gonna try and pull off five shows in five cities. That’s real talk. We haven’t figured out the logistics of it yet but that’s the plan—five shows, five cities, one day. Easter 2011. Nobunny’s tenth birthday. Be in one of those five cities. If I were you I’d be at the Playboy Mansion. Party central. Jam zone.

Do you have a favorite bunny? You watch ‘The Girls Next Door’?

I’m down with Bugs Bunny. I’ve never seen that show. I had a subscription to Playboy when I was a kid cuz the kid who lived downstairs from me was tormented and picked on and kind of a nerd. Someone pranked him by sending a Playboy subscription to his house but I knew about it and since I was his neighbor I was able to not only save his embarrassment by having Playboy not show up at his door but I was able to steal them so I had a lot of Playboys growing up as a kid. I don’t remember any of my favorite Playboy bunnies’ names but I like Bugs Bunny. Bunny Carlos from Cheap Trick.

A whole other kind of bunny.

Gotta do what I gotta do. Good deeds. Like two birds.

Is that how you learned about sex? Playboy?

I don’t know if I should say the real … well, not even the real … well, this is a real story. Well … no. But I’ll tell you what I did learn it from is Doctor D’s Birds and Bees video show volume one—‘Izzy and Miranda Cross Adolescence Bridge.’ Which you can find on YouTube, and I highly recommend seeking it out. That’s how I learned about sex.

Were you in a sex education video?

I was not in a sex education video.

Do you know about that rumor?

When does Raw Romance come out?

It’s gonna be hard to get better than a crowd full of bunnies at the Playboy Mansion.

I know! I can’t really go wrong with that. I’m just following the white rabbit—see what he does. Go down the rabbit hole, you know? Why not? I see smoke. Maybe Madison Square Gardens but we need bigger amps. We need a hi-hat cymbal—yeah, if you can print that— that we need a hi-hat cymbal and a ride stand from someone—that would be very helpful.

When did you start playing music?

Right when I was born. That’s the official story. This is the year of the rabbit. This is my year. But then again I always think that and it always falls apart so I shouldn’t get too cocky. Take it one day at a time. But you know, China did call it. It’s not just me. It’s a whole nation. I think I should maybe get going. It’s my birthday.

Happy birthday! I’m so glad you were born!

Thanks. Why not? Why not?

L.A. RECORD PRESENTS NOBUNNY LOVES YOU WITH NOBUNNY, THE RED ONIONS, CEREBRAL BALLZY, DREAMDATE AND RETOX ON FRI., FEB. 11, AT 1269 SIXTH ST., LOS ANGELES. 9 PM / $10 / 21+. YOU MUST RSVP TO RSVP@LARECORD.COM TO ATTEND! NOBUNNY’S FIRST BLOOD IS OUT NOW ON GONER. VISIT NOBUNNY AT MYSPACE.COM/ NOBUNNYLOVESYOU.