Glasser is usually Cameron Mesirow and the digitized voices of 30,000 celestial entities, but now she returns from an extended trip to Europe with Fever Ray (and more) producers Van Rivers and the Subliminal Kid as collaborators and—for tonight only in L.A.!—as her backing band. This interview by Chris Ziegler." /> L.A. Record
Menu 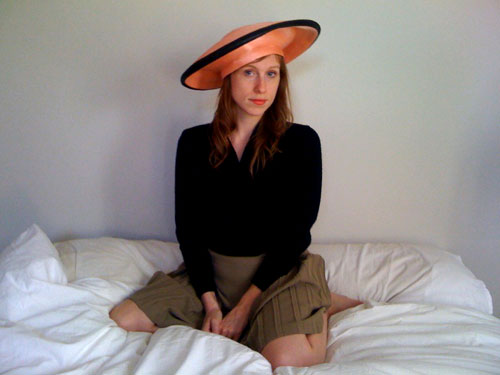 (from the Tremel EP out now on Young Turks)

Glasser is usually Cameron Mesirow and the digitized voices of 30,000 celestial entities, but now she returns from an extended trip to Europe with Fever Ray (and more) producers Van Rivers and the Subliminal Kid as collaborators and—for tonight only in L.A.!—as her backing band. After this show, she will depart L.A. for New York. This interview by Chris Ziegler.

Where do Swedes feel most at home in Los Angeles?
Cameron Mesirow: I suppose you’d have to ask them. It seems that every one of them wants to travel to Venice Beach but then they’re disappointed. When they’re there, they’re like, ‘OK, we saw it. Now where’s the fun?’
Where does Glasser feel most at home in Sweden?
Cameron Mesirow: I don’t know! I went to a very lovely place called … how do you say it? Bergshamra, and it was like the countryside. Beautiful castles and old. It looks like Fanny And Alexander, if you’ve ever seen that. Or kind of basically like Dungeons and Dragons.
How did you find your new Swedish friends?
Cameron Mesirow: I was in New York doing the Auerglass organ, and I went to a Fever Ray show with my booking agent—Daniel Tracy! Give him a shout out! He’s a good guy. I actually had a mutual friend with these guys, so when I met them I invited them to come see the organ and we hung out the whole afternoon and evening. We were going to do something but I never thought it would happen. And then at some point, I was going to Europe to see my dad.
Is he still in the Blue Man Group?
Cameron Mesirow: Yes, he is!
What does he think of Arrested Development?
Cameron Mesirow: He didn’t think it was funny at all! He said it was a generational thing. I think he thought it was gonna be really good and then he was like, ‘I don’t get this.’ The only thing he really likes is Larry David because I think he feels kind of like Larry David.
How much do you feel like Larry David?
Cameron Mesirow: Oh—so frequently. I really relate to the character. I’m extremely blunderous socially. I had an experience years ago when I told someone to their face—without realizing who they were—that their band sucked. It was hell to pay! A friend of mine was entertaining a friend, and they were saying something how ‘such-and-such a band is REALLY COOL,’ and in their mind they were probably just being funny and exaggerating. And I took it at total face value—‘Oh, I couldn’t disagree more! They’re horrible!’ And it was … silent for a second. And all of a sudden the person I knew couldn’t contain her laughter—like, ‘You’re on your own! You fucked this up!’
What did the person who sucks say?
Cameron Mesirow: They were like, ‘Oh, that’s cool. You’re entitled to your opinion.’ And I was like, ‘Oh yeah, thanks for telling me I’m entitled to my opinion because I already knew.’ And then it was really embarrassing learning who that person was.
What’s your worst fear that remains unrealized?
Cameron Mesirow: Levitation. Remember I told you my memory of levitating? I have a couple of memories that I’m not sure happened, and in one of them I levitated. I was so sure it happened at the time.
Have you tried recently?
Cameron Mesirow: Daily.
What have you been doing in Europe that no one in L.A. knows about?
Cameron Mesirow: That you’re not privy to? I guess I’ve been working on my album. I’ve been working since November and I took a break in February. I had some far-from-final mixes with me when I went to Europe and I ended up staying longer than I thought after my U.K. tour. I went to Sweden with my songs and worked with Van Rivers and the Subliminal Kid. The album has basically nine songs and there are sort of parts in between the songs as well. We basically just sat in the studio and made noise and put it all together. Now it’s funny to do live shows when the album is not totally crystallized. That means the songs aren’t going to be as you hear them on the record. They’re going to be sort of … versions of the songs set up for the show by Van Rivers and the Subliminal Kid. It’s their touch a little bit more. And we’re gonna have really rad outfits made. They’re very structural—well, mine is structural, and the other ones look literally like huts.
Will you set a campfire on stage?
Cameron Mesirow: I think we’re gonna have otherplanetary goo. Smegma from planet Glasser.
You said once that ‘I create the atmosphere before I feel comfortable saying what I think when I’m in that atmosphere, if that makes sense.’ What exactly is the Glasser atmosphere?
Cameron Mesirow: I guess it’s quite fluid. I probably shouldn’t describe it anymore because it would limit planet Glasser.
What planet do you feel the most kinship with?
Cameron Mesirow: Saturn—I can’t believe how that place looks! That being said, I know very little about Saurn and probably would never wanna go there. I probably talk about Earth the most. It’s a very popular planet—it’s getting so old!
What will you miss most about L.A. when you’re in New York City?
Cameron Mesirow: Awww! I’m gonna miss a lot of things and a lot of people. I’m gonna miss driving my car and listening to music. At least I’ll be in headphones listening to music. But it’s a special thing to listen to music in a car. I’m gonna miss a lot. It’s really hitting me now. L.A. is OK. Go Dodgers!

GLASSER WITH THE SAMPS ON FRI., APR. 23, AT THE BOOTLEG THEATRE, 2220 BEVERLY BLVD., ECHO PARK. 10 PM / $10 / ALL AGES. FOLDSILVERLAKE.COM. GLASSER’S TREMEL EP IS OUT NOW ON YOUNG TURKS. VISIT GLASSER AT MYSPACE.COM/GLASSSSER.

DEER TICK: ENJOY EVERY SANDWICH
MEGAFAUN: IT’S ALL FROM THE ...