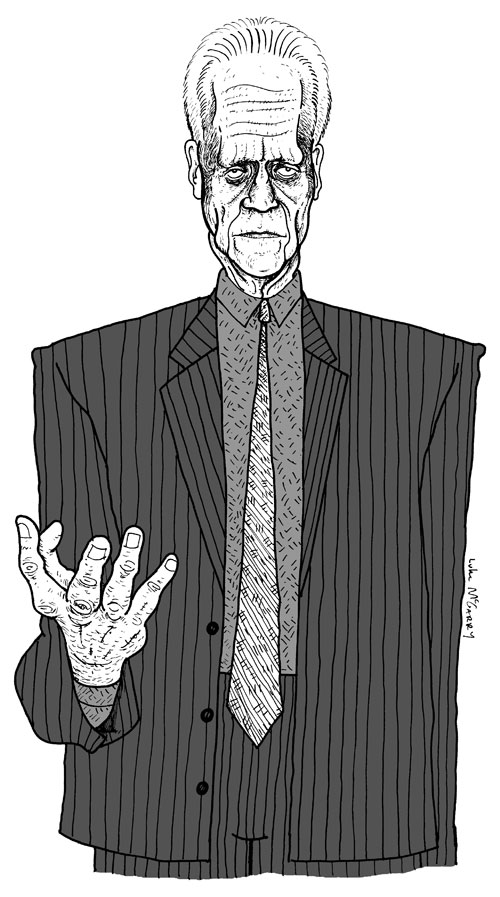 Bringing up the second half of L.A. RECORD’s rock-em, sock-em marathon interview with the voluble raconteur and rock ‘n’ roll legend would be a fate worse than Leon Spinks for many. Tall, flamboyant of dress, profane as James Joyce and possessed of a legend that rolls out before him like the fog at Dracula’s feet, Fowley is a man for whom literally everybody in the L.A. scene has a pre-set opinion. I happily cultivate a weakness for the monstrous, and discovered—to my delight—that the producer/composer/arranger/performer’s legend isn’t half so kinked-up as his back catalog. I dare any musically inclined bystander to swallow Fowley’s two Norton comps—One Man’s Garbage and Another Man’s Gold—then chase them down with the 2003 Ace Records retrospective compilation, Impossible But True, and not compare the dose to Randy Newman, George Clinton or even Vivaldi. His gifts for genre mimicry, satire, surrealism and being in the right place at the right time only barely effaced by a Rabelaisian personal rep that forms about 9/10ths of the Tinseltown gossip. He’s lately gone into personalized filmmaking on a Roger Corman/Ed Wood level, with results you’ll hear all about. There seemed nothing strange to me about his digs, certainly. Fowley’s lair is a poster-studded Fairfax District bachelor pad—a place of contemplation and assignation cunningly designed to loosen inhibitions and take its occupants far from the workday. At 70, Fowley is limber enough to fold his legs into carpet yoga for long periods while fielding snotty questions from an odd-looking man who’s just walked in snuffling off the Red Line. We knew each other slightly from the scene and jousting in the public prints, and I whiled away the moments before not listening to a deal-closing confab he was having with a prospective piece of out-of-town ass. Again, it was a scene many men know by heart and we were deep into a colloquy about older vs. younger women when I switched on the recorder and held it aloft so he could see the light. This interview by Ron Garmon.

KIM FOWLEY’S ONE MAN’S TRASH AND ANOTHER MAN’S TREASURE COMPILATIONS ARE OUT NOW ON NORTON. VISIT KIM FOWLEY AT KIMFOWLEY.NET OR MYSPACE.COM/REALKIMFOWLEY.

MAYO THOMPSON: THE MAN FROM MARS
KIM FOWLEY: YOU GOT OFF EASY K...