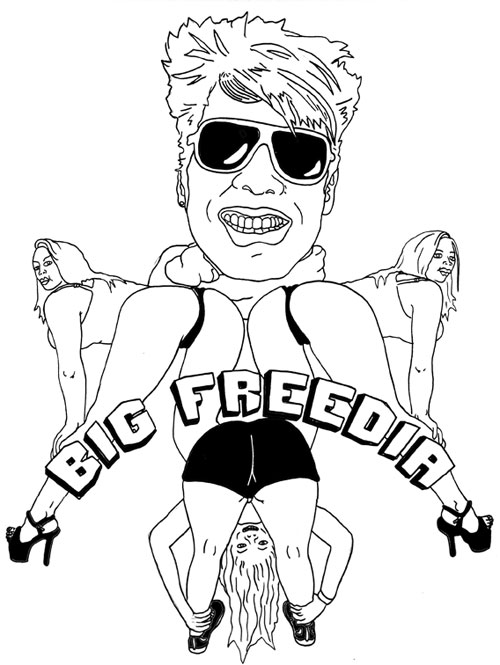 New Orleans’s premier ‘Sissy Bounce’ rapper Big Freedia will be in L.A. tonight performing a style of dance and rap music rarely seen outside of the Deep South. For those who don’t know much about bounce, it’s a highly repetitive call-and-response style of rap originating from New Orleans block parties, and it’s been ruling the local street culture for the past fifteen years. Sissy bounce is its gender-bending counterpart and has become immensely popular in New Orleans, where people are historically more open-minded to queer and transgender acts. Calling out dance moves and getting the crowd involved is what it’s all about, and Big Freedia always delivers. Even the dance-squeamish people will shake it. This interview by John Henry.

Do you think bounce is finally getting out and getting the recognition it deserves after so many years down South?
Big Freedia: Yes—I’m very excited about that because we’ve been working so hard for so long and it’s time for the exposure. A lot of people love what we’re doing—they love our music. It’s party music. It makes you want to dance and have fun and you know, get into it! See what it’s all about.
What are you calling out during the call-and-response parts?
Big Freedia: We do repetitious things in a lot of our songs and then we do more lyrical songs where we express ourselves and say what we’re feeling, but it’s more of a chant. That’s what we represent—that’s what makes it different because we can say like ‘ring your booty’ a million times, but it’s just the way you change it and what you add to it—make the flavor and switch up and change and make it be different. The people give us inspiration for new songs and the dancers and the moves that they do, and then we make up something that we would call it. So we make the name up. That’s how it basically goes—that’s how it is. It started from the past generations when you know … if the girl would bend over, then that would be the ‘Bend Over!’ It’s very self-explanatory—like I have a little song coming out called ‘Slap the Wall,’ and basically the move in the song is they’ll be slapping the wall, slapping the floor, slapping their ass, slapping everything I tell them to slap. It’s all about what you see the people do. It inspires you to make different sounds and different names for the moves. I actually saw a female at one of my concerts and she was slapping the floor when she was dancing and I just started saying, ‘Slap the wall! Shake it like a dog! Slap the floor! Make your booty go! Slap your ass! Shake it real fast!’ and it became a hit.
Is that what makes bounce such a great participatory form of music?
Big Freedia: Yeah—that’s how we do. Most of the time it happens like that because the person is actually doing the move in front of you, and that’s what inspires you to call the move or whatever. Then it inspires you to go to the studio and make a whole song about it, you know. It’s a freestyle, you know? Most of the time I’m just going right off the top of the mind from the reaction of the crowd and that’s what I love to do. Every time for whatever I say—I’m writing about what they did and where they’re going with it.
What music in New Orleans inspired you most?
Big Freedia: Some of the bounce artists that came way before me like Miss Tee and Cheeky Black and Partners N Crime and DJ Jubilee and DJ Jimi—all the old school bounce artists are what inspired me in my era when I came about. Then Katey Red—who was the first gay bounce artist down here in New Orleans—that really inspired me to take it to another level because she was a different kind of gay person that came out.
Is New Orleans more accepting of gay rappers than the rest of the country?
Big Freedia: I’m more comfortable at home—there’s mega-love here at home. I have no problems nowhere I go, but I haven’t had any problems with going out of town either. They’ve shown me just like I was at home, but in New Orleans definitely we have broken that spell. If there is a gay rapper and they’re trying to come up, they’re not going to have any problems because we’ve broken that trend definitely.
How did you end up on tour with Galactic?
Big Freedia: They got in touch with me because they heard about how my music pops through the city and stuff—they contacted me because they wanted to do a bounce record. Then they called me back and said they really liked the song I had and it was one of the best songs. Then they called me back and said they wanted to do a tour and would I like to go on tour? We actually performed on New Year’s at Tipitina’s together and it went really well and now they’re probably going to be my official band. I’ll be the first bounce artist to have a full band to do my songs live.
Are you bringing dancers on tour with you? You had quite a few when I saw you at Voodoo Fest.
Big Freedia: I had a really good time at the Voodoo Fest—it was fun. I’m gonna bring my DJ and I’m gonna bring my dancers as well … but we don’t know just yet because we’re trying to get the budget together. Between two and four. I have an album that I’ll be bringing out there with me—The Big Freedia Queen Diva album and I’ll be bringing also Big Freedia Hits Vol.1. And be looking for the new album that will be droppin’ called The Queen Diva Returns. So I have a lot of things coming out—we’ll be bringing our bounce music all over the world and trying to get it out there.