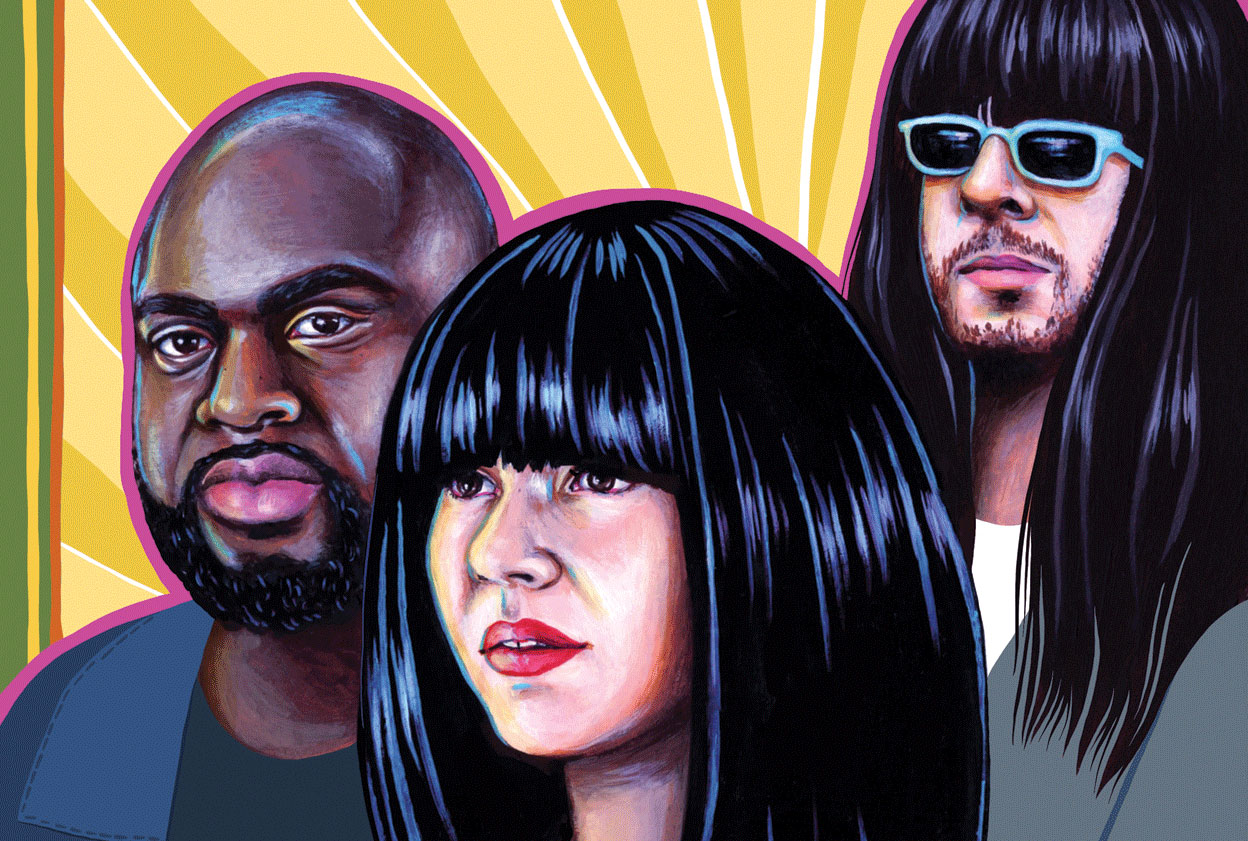 KHRUANGBIN: THE UNIVERSE SMILES UPON YOU

Let’s just get this out of the way: it’s pronounced ‘krung-bin.’ And the word roughly translates to ‘airplane’ in Thai. Formed in Texas over burgers, beers, and mutual appreciation for music and cultures from around the world, Khruangbin might not have anticipated how much their band name would get butchered out loud. The trio’s second full-length, Con Todo El Mundo, was released in January, following their 2015 debut, The Universe Smiles Upon You, with more blissful instrumental-heavy jams honed over hours playing music in a barn. Here, they delve into their writing and recording process, and explain how a croissant is a sort of useful way to understand the never-ending loop of cultural influence in music. They perform Thurs., Mar. 22, Fri., Mar. 23, and Sat., Mar. 24, at the Lodge Room in Highland Park. This interview by Daiana Feuer. ►

SUDAN ARCHIVES: IT’S ALL SO SIMPLE

A chance encounter at a show with Stones Throw A&R and Leaving Records owner Matthewdavid eventually turned into a record deal. But if it weren’t for a singing and dancing fiddle group from Canada she saw perform in the 4th grade, Sudan Archives might have never become a singing and dancing violinist. She realized this while describing her self-titled debut EP on Stones Throw and divulging a short version of her life. Sudan Archives performs with Moses Sumney on Sat., Oct. 21, at the El Rey. This interview by Daiana Feuer. ►

CHARLES BRADLEY: IT’S NOT OVER

[Reposting this 2013 interview in honor of Charles Bradley, who passed away this weekend and who will be greatly missed—ed.] Charles Bradley is special. It goes beyond his howling lovelorn voice and sparkly shirts and the way he does the robot. It’s deeper than the splits he performs on stage and the sunshine in his bright smile. Watching him, it wouldn’t be silly for you to assume he’s some sort of soul prophet … especially if you get to sit down at a music festival for fifteen minutes with a prophet who’s wearing a homemade jumpsuit with a bedazzled eagle stitched across his back, look him straight in his blurry eyes and let him hold your hand. Then you’ll believe everything he says—at least for a moment. This interview by Daiana Feuer. ►

FRENCH VANILLA: THE BEST VERSION OF YOURSELF

French Vanilla’s tag line is ‘Destroy All Dude Rock,’ but they are not anti-all-dudes. There are dudes, after all, in the band. What they want is inclusion for everyone, and they seek to spread a socially conscious message with affably aggressive post-punk-and-disco music. Here they discuss their debut full-length, out now via Danger Collective, as well as being political, being self-conscious, and the importance of DIY spaces. You might notice the absence of drummer Max from both the photos and interview. He doesn’t like that stuff, so he doesn’t do it. Boom. French Vanilla performs this Fri., July 28, at the Observatory with Surf Curse. This interview by Daiana Feuer. ►

BRAINSTORY: OUR SOULS ARE INFINITE

Brainstory's self-titled mini-album came out in May and was produced by Chicano Batman’s Eduardo Arenas. We sat down at my kitchen table to talk about it. Tony Martin arrived strapped with an acoustic bass strapped, playing from the moment he walked in until the minute he left. They perform on Thurs., July 20, at the Levitt Pavilion in MacArthur Park and at the Music Tastes Good festival this fall. This interview by Daiana Feuer. ►