Monalisa still relishes the feel and experience of vinyl—her apartment is filled with stacks and stacks of records—and still goes to record stores to dig for music. She is a successful and celebrated selector with a regular “Paths of Rhythm” show on Dublab, and is a member of Umoja HiFi Soundsystem, KPL All-Stars and Spinderella’s Backspin DJ Crew, and she’ll be DJing Wonder-full L.A., a Stevie Wonder tribute at Levitt Pavilion in MacArthur Park on Sat., Sept. 1, at 4 PM opening for DJ Spinna. This interview by Kristina Benson." /> L.A. Record
Menu 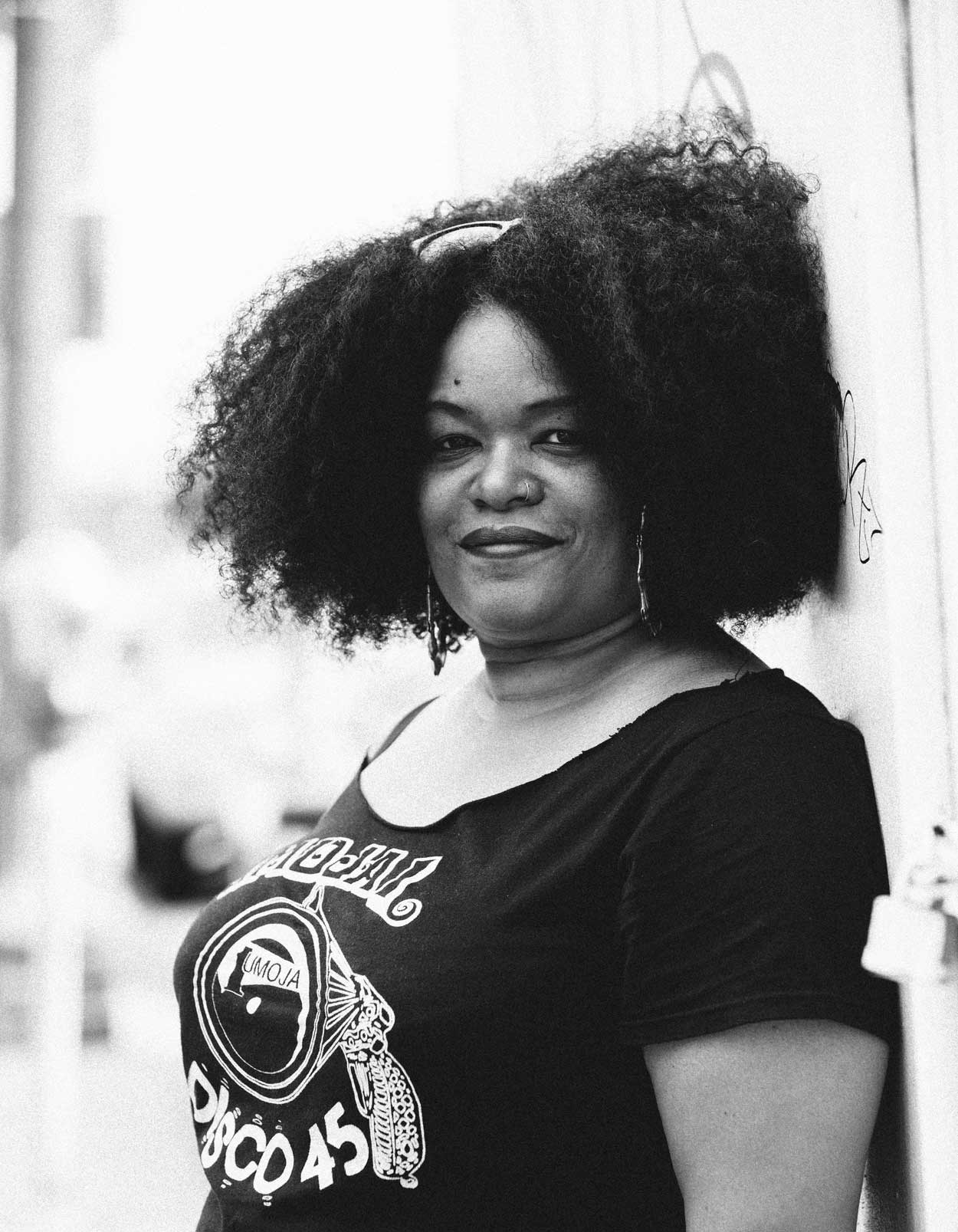 Monalisa still relishes the feel and experience of vinyl—her apartment is filled with stacks and stacks of records—and still goes to record stores to dig for music. She is a successful and celebrated selector with a regular “Paths of Rhythm” show on Dublab, and is a member of Umoja HiFi Soundsystem, KPL All-Stars and Spinderella’s Backspin DJ Crew, and she’ll be DJing Wonder-full L.A., a Stevie Wonder tribute at Levitt Pavilion in MacArthur Park on Sat., Sept. 1, at 4 PM opening for DJ Spinna. This interview by Kristina Benson.

BRICK BRICK (BANG, 1977)
“‘Dazz’ put them on the map, but I bought this record because it had a catchy song called ‘Ain’t Gonna Hurt Nobody.’ It was on the radio and it was on Soul Train. My mother gave me money, and my relatives would give me change on the holidays, and I collected all that money and went to Music Plus and I got it. The flute player in the group is Sleepy Brown [from Outkast]’s father. I started a fan page for them on Myspace and someone who owed them some money contacted them and they got money they were owed! It’s my favorite record of all time. I’ve had it since I was a kid. Sometimes it’s tough to find, sometimes there are copies everywhere. I have all the pressings—I’m just missing the Japanese pressing.”

RASA EVERYTHING YOU SEE IS ME (GOVINDA, 1978)
“I was drawn to this record by the cover—a picture of the sun and faint vision of a bird in the background. I couldn’t figure out why I was so drawn to it. Some of the people who created this record are kids of Eugene McDaniels—Chris McDaniels and a London McDaniels. I found that out years after I bought the record. I always raved about this. I would pass it to people at the record store like ‘Check this out!’ and someone was like, ‘I know that record. It’s Eugene McDaniels’ kids.’ It also been sampled, by Common and KRS-ONE. It’s a spiritual record—it has a Hare Krishna background.”

MTUME UMOJA ENSEMBLE ALKEBU-LAN – LAND OF THE BLACKS (LIVE AT THE EAST) (STRATA-EAST, 1972)
“I got a bargain on this one. There is a cast of amazing musicians who played on this one. It’s really rich, got a lot of layers, a lot of warm sound, very spiritual—very Black. The Mtume Umoja Ensemble is the whole name of the group and Mtume—he’s more known for funk music. He had the hit ‘Juicy Fruit’ and produced a lot in the 80s but he started out as a jazz musician. His uncles were very famous jazz musicians as well, and he transitioned into more of the funk later on. The personnel are all well-known jazz musicians and well-known vocalists. There is a lot of great talent on this record. It starts with a long speech. If you listen to Kamasi Washngton’s record Epic … this reminds me of Epic.”

D.J. ROGERS LOVE MUSIC AND LIFE (RCA, 1977)
“D.J. Rogers is one of the best vocalists to ever record music, and one of the most unheard of and slept on in my opinion. I can’t put my finger on it but I want to say based on how the music business works that he didn’t get as big as he should have because his music has a gospel base to it. You can tell he came up in the church because of the way he sings and the power in his voice. There’s no denying it. His music is really spiritual. He talks about love but the love is spiritual love—love for God or Jesus. More of that love because as he goes further on he gets more into that message. By the time he did his last commercial record, it was mostly gospel. His career just took him in that direction and after he put out records he starred performing in church. During his career, he had background singers like Deniece Williams and Maxayn Lewis—Maxayn is a very powerful singer and she covered a D.J. Rogers song on one of her records. Wah Wah Watson played on this record too. My favorite song is ‘Love is All I Need.’ Deniece Williams, you can hear her on this record. She stands out. It’s really beautiful—so many songs on this record with the word ‘love’ in them. It tells you where his head and his heart was at: ‘Love Will Make It Better,’ ‘Hold Out For Love,’ ‘Love Is On The Way,’ ‘Saved By Love.’ It’s a loving record.”

DIAMOND AND THE PSYCHOTIC NEUROTICS STUNTS BLUNTS AND HIP-HOP (MERCURY / CHEMISTRY, 1992)
“It’s a great record start to finish—one of the best hip-hop records ever made. The production, the intricate samples, the way they were looped and combined and layered … I’ve always loved this record. The record itself was just reissued overseas in Europe and that has all of the skits and songs that you could only get on the CD before. I’m hoping to get that soon. I’m usually into getting the original, but if the repress has something on it missing from the original I’m down to pick it up.”

THE PERFECT CIRCLE THE PERFECT CIRCLE (INNER CITY, 1977)
“This is from an indie label active in the 70s and there are quite a few hard to find records on this label. This one is hard to find, too. There’s a song called ‘Spread the News’ sampled by J Dilla and it was sampled for PPPs ‘Shotgun.’ I think that’s one thing that has driven the price up aside form the label. Those two factors—the fact that it was sampled and the fact that it’s on a rare label make it a sought-after record. There’s a great song on here called ‘Hands of Time,’ but unfortunately it skips on my copy. You can get through 3:30 of the song though—the meat of the song—before it skips.”

LOGG LOGG (SALSOUL, 1981)
“This record was created by Leroy Burgess. He came from Black Ivory, a soul/disco group in the 70s. After Black Ivory, he just created groups based on different combos of people. Logg is one of those combinations. There is a another called BumbleBee Unlimited, another called Conversion—so many. I can’t even describe him. I wouldn’t do him justice. He’s one of the godfathers of disco because of the sounds he made. If you listen to a record from back then you can hear his influence. His percussion with a high-hitting sound in there, and it’s very much all the same tempo—112, 114. ‘I Know You Will’ is 116 BPM, and another song ‘(You’ve Got) That Something,’ is almost the same BPM. If you played this record in your house, it would just go. The strangest thing about the cover is that there is a guy using a jackhammer and a woman on the back with logs between her legs and her legs in the air. It’s the strangest thing. What does this cover have to do with anything? Larry Levan remixed a lot of the records he made. Leroy just made records and then put them out and then found something else to work with to make another group and put it out.”

SOPHY YO SOY MUJER Y NO SOY UNA SANTA (LIBERTY, 1970)
“This one was sampled by the Beatnuts and RJD2. It’s a great record to sample. The instruments are really rich, it’s got good percussion, and every song—not just the ones that were sampled—has a good amount of … I use the word ‘thick.’ It’s exteremly funky, too, because it’s from Puerto Rico. I’d been asking people if they had seen it and one of my friends was at Record Jungle and he had actually seen that there. I love that store—I love that he goes above and beyond the call of duty to find records for people. His drive is above anyone’s I’ve ever seen.”

BERNARD WRIGHT ‘NARD (ARISTA, 1981)
“I love this record because its a jazz record, but it’s also considered jazz/funk—it has a jazz backrgound but it’s funky music. The people on the record—Marcus Miller, Don Blackman, Desiré White—the album is like a collaboration between all them even though it’s Bernard’s record. It’s been sampled few times. There’s a song called ‘Haboglabotribin’ sampled for in ‘Gz and Hustlas,’ also one for the song ‘I Wish’ by Skee-lo and another song for the ‘Bonnie and Clyde’ theme by Yo-Yo.”

MANDRILL JUST OUTSIDE OF TOWN (POLYDOR, 1973)
“There’s a song called ‘Mango Meat,’ and it’s sampled by the Jungle Brothers for ‘Straight out of the Jungle.’ The Jungle Brothers and A Tribe Called Quest were my intro to jazz. I never liked traditional jazz because it was noisy and it didn’t have a rhythm. It went all over the place and it drove me crazy. But the Jungle Brothers and Tribe sampled jazz I could listen to. So by getting into Jungle Brothers, I got in to Mandrill, and once I found ‘Mango Meat,’ I went down the rabbit hole. Mandrill—Ric [Wilson] and his brother Carlos—came in the store. I told them I was a huge fan. They were like, ‘What records do you have?’ ‘I got all of them!’ They were super cool. They invited us to shows and I got to sit down and meet them. I felt like … once I got to know them, who needs an autograph when I have the relationship?”