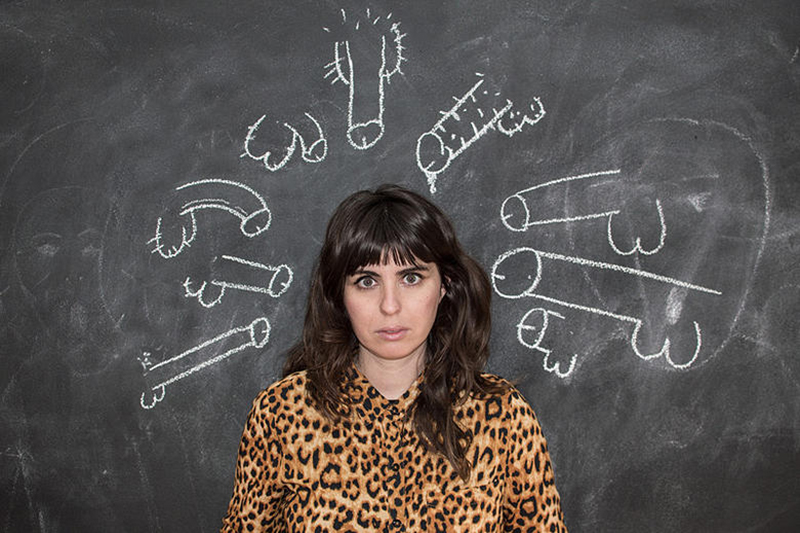 Tamara Yajia was some kind of a child star in Argentina. She’d dance and sing in those weird TV shows kids loved where an overtly sexy older woman is parading around a stage trailed by children. Fast forward a few decades and Yajia finds herself in Los Angeles, working for The Bangles, fronting a band called Ellipses, and suddenly touted as “one of the funniest women on Twitter.” One year ago she started posting her musings to a handful of friends that followed her feed about vaginas, farts, turds, sex, and family memories, like the time she walked in on her father blow-drying his pubes with a round brush. (“My dad’s bush looked like Farah Fawcett’s hair,” she says). Today she has 12,600 followers and constantly gets featured in those “tweets of the week” lists. This inspired her and best friend Lauren Brown (the tap-dancing drummer of He’s My Brother She’s My Sister) to put together a one-woman stage comedy this summer called Cumming Of Age, featuring Yajia as four different female characters, telling their hilarious awkward stories about sexual encounters, being young, being old, and embracing the absurdities at every stage in between. Yajia clearly takes a fun approach to dealing with life, and loves anything gross. So do we. This interview by Abby Wintergarden.

What do you do when a baby just stares at you in public?
It depends. If the baby is ugly I spit in its face and call it an ugly piece of shit baby, but if it’s cute I cry a little because I’m 31 and my reproductive organs are slowly drying on the inside and I can feel it. I feel like the next time I get a pap smear the doctor will look inside me and tell me that he found a bunch of sad California Raisins.
What’s the weirdest place you’ve ever unintentionally vomited?
I went through a phase in life when I would just dangle my head off my bed when I felt too drunk and I’d puke directly onto my floor. My boyfriend got mad at me and told me to stop doing that.
What’s the weirdest place you’ve ever intentionally vomited?
I intentionally puked on some gay porn at my friend’s coming-out-of-the-closet soiree. Everyone clapped.
Which Disney princess do you think has a sex life that most resembles yours?
Probably Ariel from The Little Mermaid because she doesn’t have a pussy. I mean she only has a pussy when she turns into a human, which is like a quarter of the time. I have the same exact problem. I get so many yeast infections that my vagina is basically unusable for most of the month. It’s the worst and no joke. I’ve gone to the doctor so many times and we can’t figure out this yeast overgrowth.
What’s the most unique thing you’ve ever tried to masturbate with?
I may talk a lot of talk when it comes to sex, but for the most part I’m your local average middle class sexually repressed gal. I did use a dildo so much once that I bent it like a banana. When I was in high school someone told me a story about a girl that died trying to masturbate with a broomstick. This is an awful story that I’ll never forget, but I guess the girl stood the broomstick upright, then jumped off her refrigerator and was impaled through her vagina with the broomstick. What the fuck? How horny can you be? Also, how does one stand a broomstick upright? I don’t know, sounds like an urban legend to me.
What do you think about when you are alone in your car?
I listen to the news on NPR but I usually have no idea what they’re talking about because I have a hard time following conversations so I just beat myself up in my head for being an idiot.
How would you describe the pleasures and pains of being waxed?
I’ve only done it once and I’ll probably never do it again even though I felt really sexy with a bald coochie. When the butt hole is waxed it doesn’t hurt at all, surprisingly. I couldn’t believe it! It actually feels kind of nice, like when someone braids your hair. The closer they get to the clit though, the more agony you’re in. (My spellchecker keeps telling me that the word ‘clit’ is not being recognized and it fucking pisses me off.) The clit area is a little button of sensitivity and emotions, one can’t just apply scorching wax on it and rip all of its surface off.
If there was a rom-com produced about your life, who would play you? And who would play the man you end up with?
I’d like to be played by Liz Taylor’s ghost and the man I’d end up with is Michael Jackson’s ghost and there would be a sex scene. Or I’d be played by Rosie O’Donnell and the man would be Tom Cruise and there’d also be a sex scene. In a perfect world both these couples would be simultaneously reenacting my life and at the end there would be an orgy between Liz, Michael, Rosie and Tom.
Have you ever not been able to remember how you got somewhere?
Ugh… yes. I smoked some questionable weed in Tijuana once and all I know is that I was found by the hotel’s security guard, lost and disoriented, walking around in my pajamas in the middle of the dance floor of a Mexican wedding. Life is wonderful.
Open up a random page in one of your diaries and write the contents:
‘I’ve become a slice of cheese pizza. No man will ever want me! I can only become human by showering. I can’t wait to get off work so I can take this green coat off, sit in my car, let out a big fart…’
What song best describes the time you lost your virginity?
‘Eye Of The Tiger.’ I woke up one day and was like, ‘I’M SICK OF THIS BULLSHIT AND I’M GONNA LOSE IT RIGHT FUCKING NOW,’ and I drove one hour to meet this guy I kind of liked in the Valley and was like, ‘TAKE IT MOTHERFUCKER!’ Then I cried for days because it made me emotional.
After seeing your father do it, have you ever tried blow-drying your own pubes?
No.