here!), and to whet everyone's appetite he's filled his new YouTube channel to bursting with these top-flite L.A-releated 45s! All brilliant selections and descriptions below by Toubin, of course. So sorry but now you have absolutely no choice but to get out and go to this—the soul has spoken!" /> L.A. Record
Menu 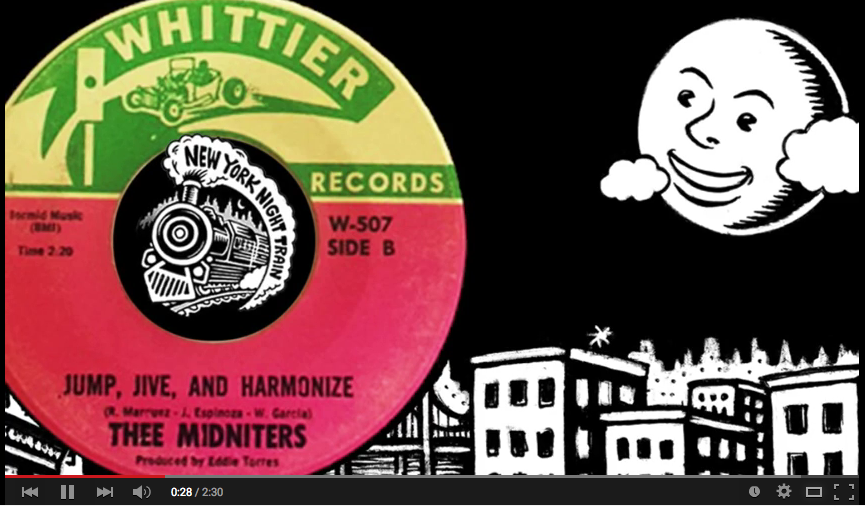 Jonathan Toubin will be presiding over his legendary Soul Clap and Dance-Off on Sunday, May 24 at the Regent Theatre (tickets and info here!), and to whet everyone’s appetite he’s filled his new YouTube channel to bursting with these top-flite L.A-releated 45s! All brilliant selections and descriptions below by Toubin, of course. So sorry but now you have absolutely no choice but to get out and go to this—the soul has spoken!

“‘Turn On Your Love Light’ times a million! Stone cold East L.A. classic! The finest recorded moment of one of the best bands ever! What the heck, let’s just say this is one of the most exciting musical performances committed to tape in any genre… anywhere… ever! A heart-stopping guitar riff intro, relentless drumming, blasting harmonicas, heart-stopping dynamics, and the kind of tension and release teetering on the edge of collapse that makes all the best art live way past its time! Like most of the best stuff, now and then, they only sold a few copies! ‘Jump, Jive, and Harmonize’ probably peaked at number 362,541 on the Billboard chart that year while ‘Light My Fire,’ recorded a few miles away, was a number one hit. How could anyone have any faith in the popularity of a record? How could you believe in consumers? Now or then? Could it be that records like this are too out of this world and there aren’t enough cool people to buy ’em? Fortunately time has a way of elevating neglected masterpieces to the rightful position in culture and now, fifty years later, this is probably Thee Midniters second-most notable track thanks to Norton Records’ In Thee Midnite Hour compilation and 2009 pressing of this single….After years of searching, I found this original 1967 copy in East L.A at Highland Park’s Avalon Vintage—not far from the source … The perfect place to find the perfect record and the rare experience that justifies all of those hours of failed hunting.You got the soul baby! That’s all it takes …”

“When Mac Rebennack night-tripped to L.A. in 1965 he joined up with one of the Big Easy’s most distinctive vocalists to record this lone single for A&M Records. For such a supreme quality record on a major label to be such a rarity means that the Zu Zu Blues Band was lost in the label’s mountain of whipped cream that year and clipped before it ever had a chance to get off the ground. This is too bad because “Zu Zu Man” may be the perfect all-time soul dance record: groovy, infectious, dynamic, timeless, and unique in almost every way from the wild beat to the shimmering B3 to the exotic riff. Though it retains a very New Orleans syncopation, it’s way more upbeat than a lot of Louisiana groovers and so spacious and pentatonic and weird that its hard to place when and where it comes from. Dr. John and Jessie Hill sound exactly like Dr. John and Jessie Hill but this recording is an entirely new place and time for them. Two familiar characters in an unfamiliar setting. Though the two collaborated in L.A. on a few Pulsar Records after this, ‘Zu Zu Man’ is a portal to a dimension that neither of them, and none of us for that matter, have ever entered again…. Turning this is as close as any of us will ever get.”

“A Los Angeles group that evolved out of the Jewels in the early 1960s recorded this weird and wild dancer produced and arranged by Gary Paxton—the legend behind ‘Monster Mash,’ ‘Alley Oop,’ and many more! A snappy beat, an unusual arrangement, and a pentatonic riff. While it sounds like a party, the lyrics are about ‘troubles’ and if you missed the theme, the word ‘troubles’ is repeated dozens of times …”

“Los Angeles Soul dance party excellence featuring Mr. Bongo Rock himself! I hear Preston Epps is still active in the Los Angeles area and still amazing! This track pairs him with a smokin’ band and the soulful vocals of Andre Franklin. ‘Lemme hear you say “Yeah!”‘ ‘Yeah!’ The floor always gets involved in the call and response when DJs drop this one. And if this doesn’t make you wanna move, you may be dead …”

“I know absolutely nothing about this killer track. Can you help me?”

“One of East L.A.’s biggest recording stars and top-drawing performers, 15-year-old Little Ray rode the wave of Bobby Freeman’s 1964 hit ‘C’mon and Swim’ with this answer song that name-check’s Freeman. You can’t not dance to this beat. Exactly what summer should sound like…”

“Just when you thought they couldn’t improve on ‘Psychotic Reaction,’ Brenton Wood gets a hold of it … He dedicates this one to the girls out there who’ve cast a spell on him with all of their ‘oogum bogum’ and keeps it weird throughout. This track never came out on 45 in the USA, so this is ripped from the Australian ‘Gimme Little Sign’ EP pictured here …”

“In 1963 supreme rhythm-and-blues vocalist Young Jessie updated his 1955 rock and roll hit ‘Mary Lou’ for the soul generation on Mercury Records with legendary producer/engineer Jack Nitzsche. Nitzsche gives this one a firm Latin beat and a super-elegant arrangement that turns the song into something completely new while still remaining true to the spirit of the original. And the production really brings forth the personality and deep nuances of Young Jessie’s huge pipes and engulfs the song in his resonance. About as close to perfect as it gets. The other side ‘You Were Meant For Me’ is also stellar.”

Cannibal and the Headhunters “Out of Sight” (Rampart, 1966)

“Many of the best 1960s East L.A. chicano rock’n’roll recordings are lo-fi garagey versions of soul dance hits rocked up with passion and distortion. Thee incredible Cannibal and The Headhunters’ fast and muscular take on James Brown is a classic exemplar of this phenomenon at its finest. Soul power! Don’t fight it! Feel it!”

“I’ve learned nothing about this artist or this record so far! ‘Bailar Pt II’ has that sort of Bert Bern’s latin-tinged “Twist and Shout” beat, chord progression, and builds with voices rising in pitch: ‘Ahhhhh…. ahhhh… ahhhh…’ The predecessor and aesthetic sister of ‘Lucy Baines!’ And also in-your-face maracas all over the place … This sat in my collection for a long time before it started popping out and is now one of those signature cuts that I’ve never heard elsewhere. More of a pop dance oddity than a soul song but fits well enough at the parties to be included near the deep end of side B of Norton Records’ Souvenirs of the Soul Clap, Vol. 4. A unique and lively builder. I have a feeling it was mislabeled as Pt I is the more boring instrumental side and Pt II is the vocal side …Does anybody have any information about this record or artist?”