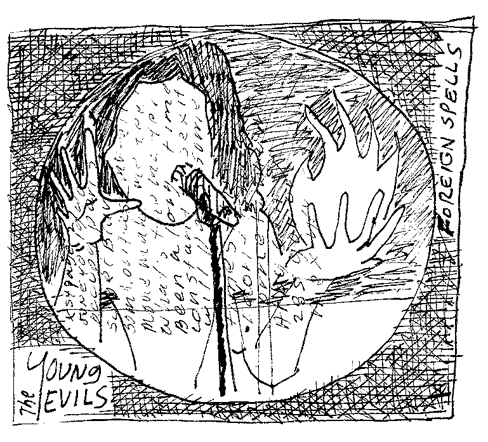 Previous efforts from Seattle’s the Young Evils—see Enchanted Chapel—have been as sprinkled with sunshine as the Emerald City is with raindrops. But while the four-song Foreign Spells EP features a darker tone and more minor keys, boy-girl harmonies and sparkling pop melodies remain the band’s defining qualities. On “Dead Animals,” the first single, Mackenzie Mercer might be singing “Dead animals/that’s what we’ll become” but the bouncy undercurrent and questioning lilt in her voice communicate she hasn’t given up quite yet, and prevents the track from descending into a dirge. Opener “Darker Blue Bayou,” with its baseline balanced deftly between plodding and groovy, is a similar exercise. Because while the lyrics focus on the inevitability of the sun consuming the earth—don’t worry kids, an asteroid will kill us way before then—and invites listeners to start a riot, the communion resonant in the dovetailed vocals of Mercer and bandmate Troy Nelson reassure us that as bleak as it might get, we’re not in this alone. “Touch Tone Lovers” punctuates the EP, and it’s arguably the collection’s strongest track. Here, the opening guitar lines ascend in a loopy arch before retreating to twinkle against Mercer and Nelson’s exposition about stillborn long-distance love, and the effect is cinematic, conjuring up images of the desolate highway stretched between the pair. By embracing a darker edge and building on the band’s foundation of hypnotic, jangly pop, Foreign Spells shows the Young Evils’ future looks bright indeed.

GREG GOMBERG: ONLY THE FUTURES...
MYKA 9 AND FACTOR: SOVEREIGN S...

NATURAL CHILD: FOR THE LOVE OF THE GAME