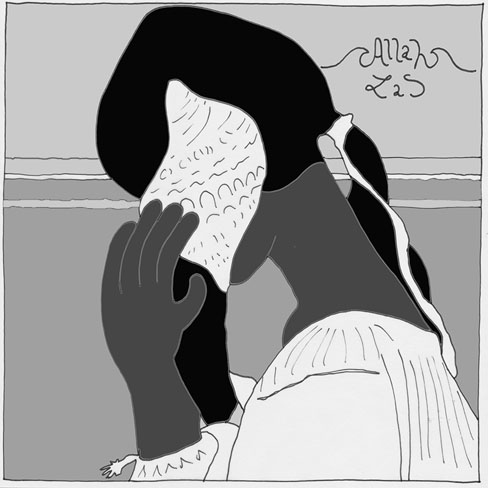 This first album by these L.A.-area garage guys sounds exactly like what you’d expect, i.e. pretty damned good. It’s lo-fi and jangly but tough, like an 11 year old with a temporary tattoo and a candy cigarette is tough. Unlike the Strange Boys, who obfuscate their garage origins with their baby-blues voices and singing about “stuff that matters,” the lyrical content of these tunes could easily be pulled straight out of a Back from the Grave or Teenage Shutdown comp. I’m talking girls, and meeting a new girl and bragging about it to the old girl, and telling the world what you’re NOT going to do because you’re not just going to be put “on a shelf!” Yet like the Strange Boys, the Allah-Las have found their own strain of garage that’s not about snarl so much as it is about mood, and that mood is a little down-tempo, lazy enough for summer but chill enough for the fall and winter to come. Sure, many songs on here (“Catamaran,” “Sacred Sands,” “Catalina,” “Sandy”) have a beachy vibe. But there are also songs about earthquakes, because the real theme of SoCal and of this album is upheaval, just like the teenage surf bands of old had to go through in the mid-60s, when playing “Miserlou” had become passé but before they’d fully discovered how to have a rave-up with the Yardbirds. This album is deceptively tense, and it hints that the Allah-Las will have some staying power.