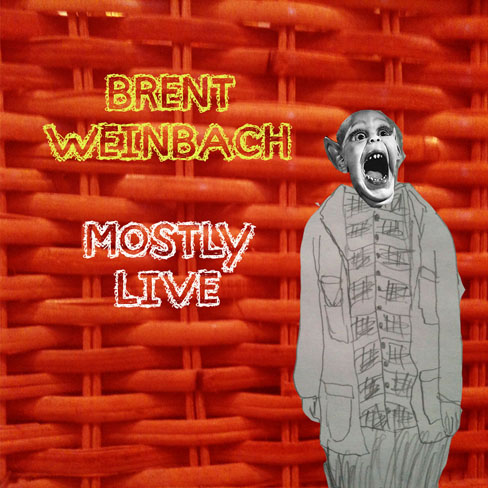 Sometimes it’s easy to watch a comedian up on stage and think, “Oh, I could do that.” And then you hear an album like Brent Weinbach’s Mostly Live, and realize, no, holy shit, I could never do this, and this really is an art form, a blend of wit and acting and preparation and careful control, and I’m just going to shut up and let the man do his thing. After over a decade in the biz, he really knows how to pace himself, telling jokes with lots of false stops and starts, his DJ-like tenor voice so authoritative that you follow him no matter how astray his train of thought may meander (if he ever decides, like Steve Martin, to stop being funny, he’ll make a fortune in voiceovers alone). At one point, he becomes a woman named Karen, and tries to award you a vacation to beautiful Bakersfield, CA—but he’ll just as soon drop a character and throw you for a loop, or morph one character into the next, or engage the audience in repartee with characters he’s inventing on the spot. His crowd work in particular is pretty admirable; even folks like Louis C.K. have a hard time with hecklers, but Weinbach creates his own, thriving in the anything-can-happen aspect of live give and take. It makes me wish he’d included fewer pre-recorded bits, one of which about marshmallows up his butt falls as flat as you’d expect—but with this many wins, Mostly Live still comes out mostly hilarious.

KERA AND THE LESBIANS ARE BRINGING DUENDE BACK