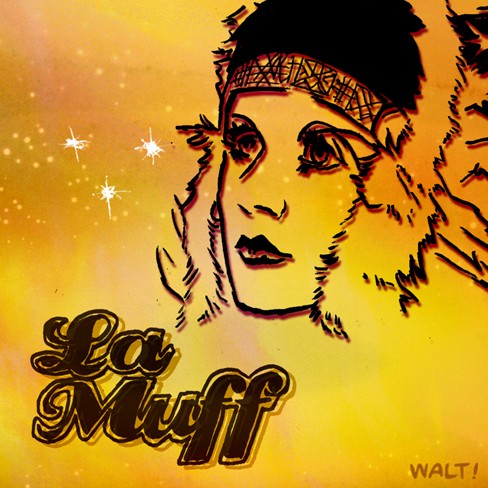 Not so much post- as pre-rock, L.A. chanteuse LaMuff evokes several of the entries in Nick Tosches’ estimable study Unsung Heroes of Rock ‘N’ Roll while working her own permutation of SoCal hip-hop. The title track’s epically weird “It ain’t lame/It’s lamé” is merely the opening salvo in a Somme-like bombardment of half-connected nouns and verbs that add up to the funniest thing since Lothar & the Hand People. LaMuff’s voice is clearly the product of many hours of highly competent training and she displays a commendable sense of variety, following up the aforementioned Tinseltown camp with “Proof,” a synth-driven disco sobber of the kind Grace Jones used to emit back in the Reagan Age. “Come On, Taste My Rainbow” is a word salad built on a chopped-up Eurythmics riff with a rhyme of “refraction” with “attraction” that is one of its more edible components. The deadpan “Scrabble Champ” closes out proceedings in an icy hail of glossolalia, neologism and high-value adjectives and gerunds. Being pure lexical nonsense, it’s the standout track.

THE MOOG: SEASONS IN THE UNDER...
HUNX: HAIRDRESSER BLUES