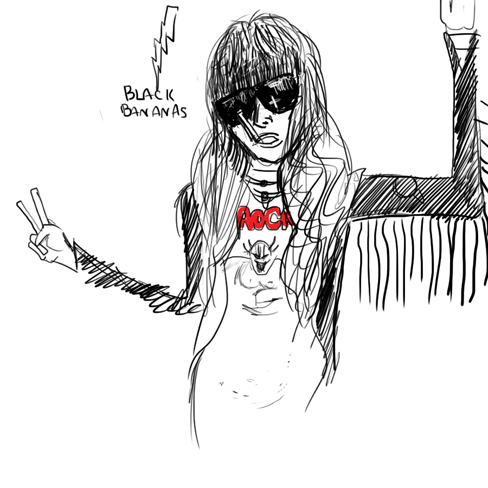 If you’re a Jennifer Herrema fan, you already know that RTX changed their name to Black Bananas, and you undoubtedly already own this album because you’ve been waiting with baited breath since 2010 for it to come out. But if you’re lukewarm on the RTX and Royal Trux discography, this album is a force to be reckoned with on its own terms. Though there’s plenty here for the familiar fan, Herrema’s taken the Frampton vocoder vibe from the last RTX album and stretched it in a new, funky direction: music with boogie, from boogie rock a la Edgar Winter to the kind of synth boogie DAM FUNK champions, though perhaps never for an entire track. She’d do well to go full immersion at least once: even on tracks like “Hot Stupid,” which begins almost exactly like George Clinton’s “Atomic Dog,” she sounds like Alice Cooper by the end. But it works the other way too, and so songs like “My House” that sound EXACTLY like Def Leppard’s Pyromania wind up having cool phased guitars reminiscent of Funkadelic or 70s Isley Brothers.  There’s something both exciting and familiar about this album’s sound, which hearkens to that period in the 80s where George Clinton and Zapp were making way for Prince, albeit with backward-masked sounding guitars and plenty of leftover hair metal vibe. This is the rock of party vans and melted 8-tracks. And fair warning: songs with titles like “Rad Times” and “Do It” are going to make you want to do all the cocaine in the world!

DESERTED AT THE PALMS ANNOUNCES FULL LINE-UP FOR MAY 30: KING TUFF, BLACK BANANAS, NO AGE AND MORE