THE BALLAD OF GENESIS AND LADY JAYE @ CINEFAMILY 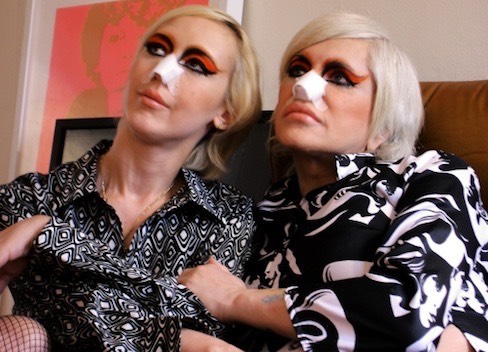 When Genesis first met Lady Jaye, Genesis had just spent the night sleeping in a friend’s S&M dungeon. S/he woke up to see a beautiful young woman wearing an exquisitely-coordinated 1960s Mod outfit walk into the dungeon, and then take off her clothes and change into an equally remarkable set of fetish gear. This episode would foreshadow the rest of their story, where love at first sight, romance, and nostalgia would blossom simultaneously with explorations into radical sexuality, gender nonconformity, and transhumanism.

The Ballad of Genesis and Lady Jaye is a new documentary that tells of the love affair between Genesis P-Orridge, prankster, artist and pioneering experimental musician, and Lady Jaye Breyer, performance artist, cabaret performer, and professional dominatrix. Several years into their marriage they mutually decide to undergo a series of operations in order to look like one another. They get surgeries to alter their noses and chins. Genesis gets breast implants, which s/he happily shows off to the camera. The motivation is partially a testament to their love, partially an exploration of self, and partially an art project. The pair desire to create a third entity between themselves, the Pandrogyne, that would live separately as a combination of the two of them.

Lady Jaye died suddenly in 2007, leaving Genesis behind to carry on their projects and to tell their story. Genesis narrates the documentary, leaving Lady Jaye a distant, enigmatic, but ever-present figure. We see the couple spend an afternoon in Central Park, rehearse with their band, look through their wedding photos (they both wore drag). In a willful anachronism, the film is shot almost entirely in 16mm, rendering Genesis and Lady Jaye’s world in the valentine hues and velveteen textures of celluloid film grain, complimenting the intimate, home video nature of the footage.

While this story would lend itself nicely to an anthropological, sociological, or political film, director Marie Losier mostly lays these issues aside and focuses exclusively on the romance. This approach leaves a few gaps by the end of the film’s brisk 72 minutes: we don’t see much of Genesis’s relationship with their grown children, nor do we get more than a glimpse at Genesis and Lady Jaye’s other art projects or even their flaws or personal struggles. It’s a lovely story starring complex characters, but one told without much conflict.

In the end, The Ballad of Genesis and Lady Jaye is an idealized portrait of a loving marriage, one as loving as the ideal of any “normal” relationship, albeit one between extraordinary people. It poignantly captures two lovers united in the contradiction of their love affair: they express their radical individuality with the ultimate consummation of sameness. They find a love familiar in its shape but dissident in its architecture. Their love questions its gender and shouts its own name.