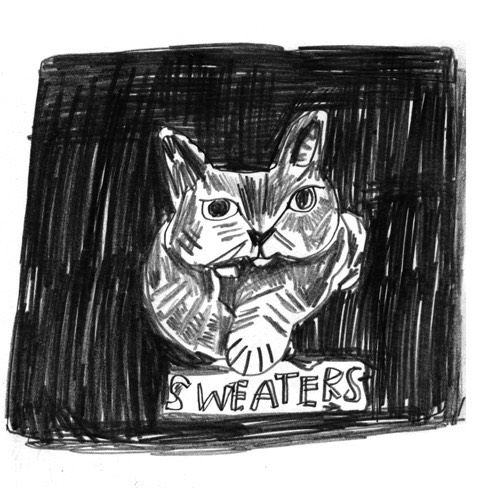 Sweaters “Skymall”
(From “Investigations”/ “Skymall” 7” out now on Slow Death)

The debut single from Sweaters teeters between the highs of lo-fi and the lows of hi-fi, showing a band with its influences on its sleeve, reaching for something very near to their hip little wrists. While some of the piano overdubs provoke comparisons to Billy Joel or Don McLean, this 45 is a fine step in the development of a new band. Both tracks— “Investigations” (a wry break-up song that drummer Joel Black calls “Badfinger without the bad news”) and “Skymall” (“I Can’t Explain” meets “Squeeze Box”)—are full of infectious hooks, lush melodic harmonies, pummeling rhythms, and a combo of smoldering tones from lead guitar and a farfisa organ, collectively delivered with a brashness that warrants this band some street cred. The fact that this record is on vinyl only makes the sound (vocals and organ especially!!) that much warmer and full. When I started to write this review, it was late, and I figured that it should only take me as long to write as it would to listen to it. But as my first draft was finished, I found myself comingback to the record again and again. It was bright. It was bliss. The debut single from L.A. band Sweaters is a true pop artifact—never plastic, never dull, but rough around the edges, like gravel in the warm sun.