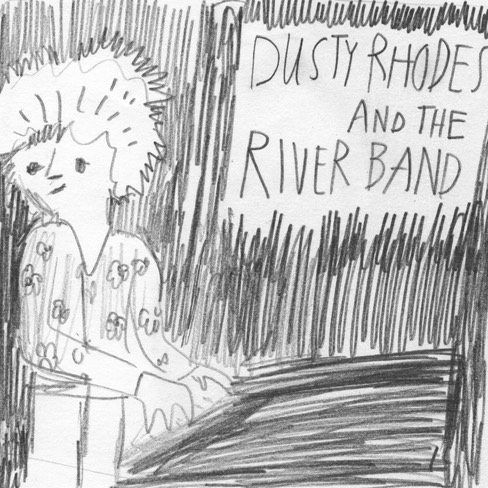 Dusty Rhodes & The River Band “All One!”
(From their self-released self-titled LP out now)

Dusty Rhodes & the River Band is a swinging, preaching, liquored-up California Dream taking the lord’s name in vain. The band has its knees in church and its elbows resting on a saloon bar. “Branch Davidians” opens the album with a somber funeral rhythm. This nostalgic song describes an insider’s POV on the raid on David Koresh’s WACO compound. It begins: “Please watch over the children. Please don’t let them go outside. They will die.” Moving right along to the ebullient, groovy “All One!”—squeaking lasers add fullness to each drum strike while the group pulls off multi-part flower power choruses about sunshine. “All One!” and “Get Out Alive” are so poppy, they stick to my mouth. Dustin Apodaca’s incomprehensible rock ‘n’ roll growling completes the soul revival. “Ballad of Jim Jones” strolls into to church hungover, preaching about getting clean through Jesus. The chorus hits high notes on this one before returning to the bottle on “Dear Honey,” a swinging ragtime drinking song. Ozzy and Van Halen stop by for a video game battle during “Street Fighter Opus Part 1” and “Part 2.” As if the band must play its way through every relevant genre, we eat some fried chicken Americana (“Leaving Tennessee”) and country-style green beans (“Ballad of Graph”) before winding down on a vaudeville tip with “Highest Mountain.”

THE LIKE: RELEASE ME
BOMBÓN: LAS CHICAS DEL BOMBÓN