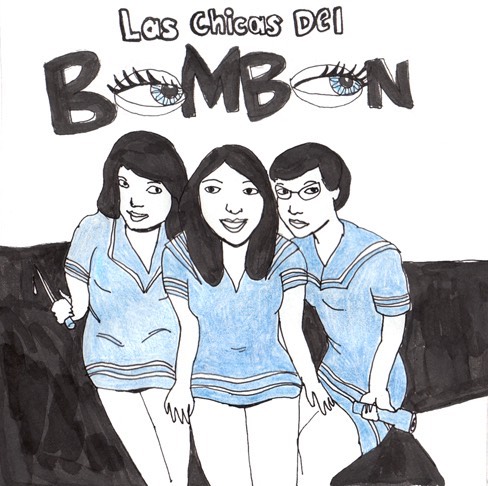 Chances are you probably already know San Pedro is the proverbial underdog of the greater Los Angeles area when it comes to musical output. Yes, the Minutemen came out of San Pedro and yes, Mike Watt is still really involved in keeping its constantly burgeoning punk scene alive. But San Pedro rarely seems to represent itself beyond the south side of the 110 and the 405 these days. Bombón just may change that. The band’s debut LP, Las Chicas del Bombón, is 25 minutes of ’60s surf-inspired garage punk jams that ride the line between the charm of Beach Blanket Bingo and the soundtrack that might accompany Link Wray surfing on a coffin. The record’s opening track, “El Cowboy,” launches into a realm of swaggering rockabilly, which is quickly sideswiped by later tracks like “Fangbanger” and “Je Vous Veux” that showcase the band’s dark side with ghoulish organ, eerie soundscapes, and vocals that seem to float out of the ether of low tide. Despite the saccharine “ooohs” and “ahhhs” of poppier tracks “La Playa” and “Oh Baby,” Bombón’s members manage to escape the cliché of the cute all-girl neo-doo-wop trios we’ve seen so much of lately by seriously knowing how to rip on their instruments without masking them in a bunch of fuzz. That’s not to say this record isn’t awesomely raw: after all, it was recorded to 1⁄2 inch analog tape in a punk house in a little port town called San Pedro.