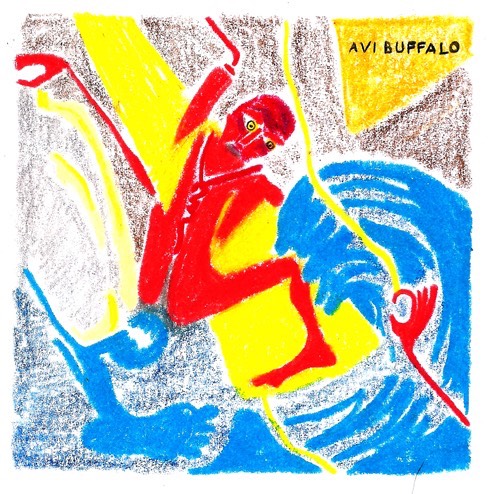 Avi Buffalo gets hated on by a lot of L.A. bands. I couldn’t believe the catty whispers from the musicians around me when I saw these kids—who really are just kids, fresh out of high school— play the KXLU/Smell showcase in Austin. Part of it was jealousy at the raw skill on display—in a pretty Surfer Rosa, almost-Joe-Satriani kind of way, band leader Avigdor Zahner Isenberg shreds the fuck out of his guitar. But I think what freaks people out most is that at Avi Buffalo’s emotional core, there’s a frustration that’s remarkably pitiful and world-weary. For some people, it must feel like a put-on—how dare four little kids play dress-up! But the blues is about feeling good, and each song on Avi Buffalo is like a Lucian Freud painting or a Raymond Carver short story. These are portraits of misunderstood, unloved, ugly things yawping into the void about their lusts and losses. And they are beautiful. You feel affection for these first-person characters, and maybe even a little mirth at their self-pity. Hell, on those rare occasions when Mr. Zahner-Isenberg allows himself to write like an actual teenager—such as on the literally sophomoric “Summer Cum”—there’s a downright J Mascis laziness to his vocals that matches the characters’ inability to clear up their confusions. The girl protagonist of “Summer Cum” makes dessert out of a pre-made pie crust, and the male narrator can taste a “robot’s fist.” The yawp drawls into a laid-back final “yep!” So what if, say, Flaming Lips mastered some of these sounds a decade ago? Avi Buffalo has the same guitar/bass/Nord/drum line-up we’ve heard for years, but have we ever really heard a song like “Where’s Your Dirty Mind” in which a frail boy and frail girl recite verses over a plinking piano and dixie-doodle Southern-fried guitar, using pervy middle-school urges as an ineffective shield against mortality? And that’s only the last in Avi Buffalo’s string of familiar yet highly original hard-luck songs about broken, bad-mannered losers. Like J Mascis, Zahner-Isenberg’s reedy voice contrasts sharply with the virtuosity of his band’s instruments. With Avi Buffalo, the brightness of intricately plucked guitars and occasional keys sweeps the darkness hither and yon—never dissipating it, but never letting it overwhelming you. (Only 60-Watt Kid has channeled this kind of sunny, wave-lapping beauty in recent times.) In fact, the only bad feeling I get after listening to Avi Buffalo is that it makes me want to go back in time to slap the shit out of myself at age 19 for not also being able to squeeze poignancy out of phrases like “summer cum” or craft Arthur Lee-ish song titles like “What’s In It For?” Technically, this band is a solo-project and the other members brought in later, but my favorite part of the album is when keyboardist/vocalist Rebecca Coleman takes the reins in “One Last”—a fantastic call-and-response ditty, almost like a Lee Hazlewood/Nancy Sinatra song, but replace Lee with Neil Young and Nancy Sinatra with a good vocalist. Zahner-Isenberg is great, but Coleman’s voice is emotive in a bolder, almost-country way. I wish she got mixed louder on some of the other songs. Or maybe it was a genius choice to haul her out as a secret weapon—a Bizarro-world Dee Dee Ramone who actually bests her lead singer. Taste is the hallmark of this record, even more so than in the band’s live set. At one point, Mr. Zahner-Isenberg reminds us that “no one could make you lose your faith, except for someone who you love.” Somehow, Avi Buffalo takes a sound I thought I had no love for and makes it rekindle my faith in guitar rock. Not since the Smiths has a band taken recent tradition to such new heights, and I suspect this won’t be Avi Buffalo’s last great album.