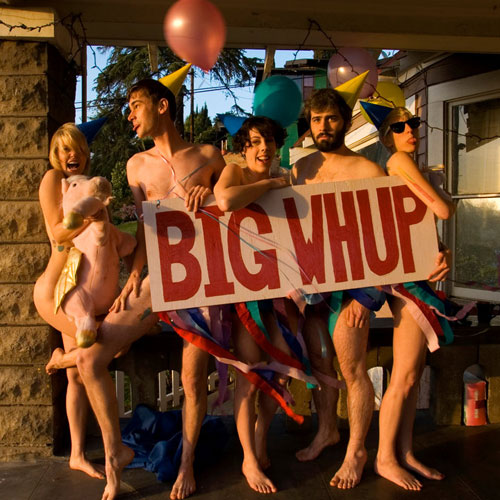 (from the self-titled 7″ available soon from Big Whup)

Big Whup’s first self-released single shows the time and care they put into this project—from the nudie sleeve art, the hand-stamped labels and the clean-yet-dynamic recordings—and features two so-called A-sides, giving a side to each singer. On side A, “Boniz Heart,” keyboardist Drew Denny represents the female voice, and it comes across as a mix of early Belle and Sebastian and bands from the Too Pure catalogue. She begins by singing in French before switching to English for a catchy call-and-response with her keyboard. The song ends with sing-a-long chants, one of bears a striking resemblance to Joy Division’s biggest hit but replaces ‘love’ with ‘flesh.’ (Wonder about that statement.) The instrumentation of the song begins with a country-twanged guitar and Morgan Gee’s violin carrying the melody, backed by a minimal and tasteful bass and drums. Side AA, “Cover My Eyes,” begins with a gradual instrumental build-up before we get a chance to hear the male lead and guitarist Geoff Geis, whose voice is recognizable as one of the singers of Pizza! Due to his unique vocal stylings, comparisons to that band are hard to avoid, though not necessarily spot-on. Where Pizza! come off as a hypnotic dance-y hybrid of Devo and the Homosexuals, here we have Geis sounding like a crooner version of Pete Doherty, if Doherty had the baritone of Calvin Johnson—and throw in some of LA ’60s retro punks the Last for good measure. The band on this track is pushed to the back more, giving Geis’s lead vocals and Denny’s haunting harmonies ample room to carry the song. This is a great single—not only because each of the songs are catchy and memorable, but also because it showcases two different voices and the diversity of sounds they can create.