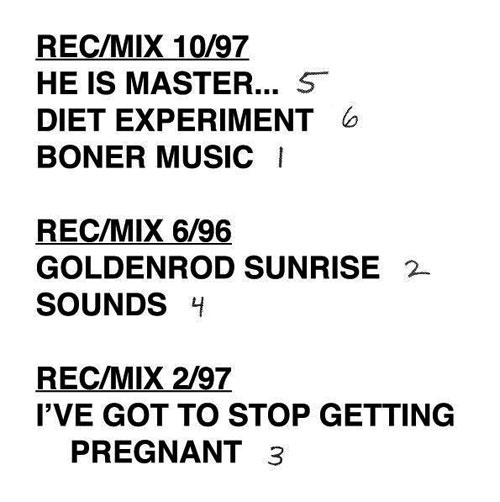 (from the Uphill Gardeners LP out now on olFactory / Kill Shaman)

If you went to the Smell, Alligator Lounge or the Impala Cafe with any frequency in the ’90s, Uphill Gardeners were one of those bands you thought were going to be around in L.A. forever. Suddenly, however, they were not, although the band members—Jarrett Silberman (Young People, Liars), Nigel Lundemo (Godzik Pink, Donut) and Bobb Bruno (Polar Goldie Cats)—have remained stalwarts of the scene for all this time. So out of practically nowhere comes an LP of unreleased Uphill Gardeners music—and though this was a band I’d seen many times over the years and thought I could just nip out on for a minute while they were performing and not miss much, I now realize how much I really did miss this band. Six cacophonous, evocative instrumental tracks from 1996-1997 recorded by redoubtable engineer Tom Grimley, who apparently doesn’t record bands anymore—which is rather a shame. It’s been said that Uphill Gardeners represent some kind of No Wave by way of Los Angeles, but No Wave always seems like such a New York thing that it comes off as slightly disingenuous to assign them that signifier when they’ve got so much happening on their own merits. Primitive disorienting art rock might be a better way to put it; “moody noise noir” might make even more sense, but only time will tell. The track listing seems to have been mixed up for some reason on the sleeve—which makes this record even more thematically perfect than you could have ever dreamed.

THAT DOG + GRAHAM COXON @ THE SMELL